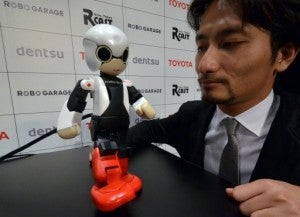 Kirobo — derived from the Japanese words for “hope” and “robot” — was among five tons of supplies and machinery on a rocket launched Sunday from Tanegashima in southwestern Japan, the Japan Aerospace Exploration Agency, or JAXA, said.

The childlike robot was designed to be a companion for astronaut Koichi Wakata and will communicate with another robot on Earth, according to developers. Wakata is expected to arrive at the space station in November.

Robot designer Tomotaka Takahashi, of the University of Tokyo, advertiser Dentsu and automaker Toyota Motor Corp. worked on the robot.

The challenge was making sure it could move and talk where there was no gravity.

Ahead of the launch, the 34-centimeter (13-inch) tall Kirobo told reporters, “one small step for me, a giant leap for robots.”

Japan boasts the most sophisticated robotics in the world, but because of its “manga” culture, it tends to favor cute robots with human-like characteristics with emotional appeal, a use of technology that has at times drawn criticism for being not productive.

But Takahashi said sending a robot into space could help write a new chapter in the history of communication.

“I wish for this robot to function as a mediator between person and machine, or person and Internet and sometimes even between people,” he said.

JAXA said the rocket launch was successful, and the separation of a cargo vehicle, carrying the robot to the space station, was confirmed about 15 minutes after liftoff.