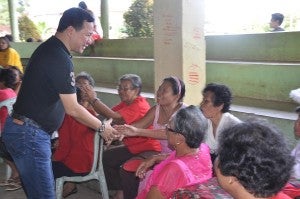 TACLOBAN CITY, Philippines—Biliran Rep. Rogelio Espina has gone to Facebook (FB), a popular social networking site, to show that the projects and programs funded with his pork barrel are above board in the wake of controversies surrounding its abuse.

This way, Espina said, his constituents would know what he had been doing and asked them to post their comments and suggestions.

Based on the post on his Facebook account (Cong Rogelio Espina), P15 million of his pork, officially called Priority Development Assistance Fund (PDAF), would go to non-infrastructure projects and programs, while another P20 million would be for infrastructure.

Of the P15 million, P5.3 million will be for the Naval State University and Biliran National Agricultural College, P1.5 million for Tesda-Cabucgayan scholarship to benefit 1,479 students, and P1 million for the maintenance and fuel of a school bus for two public high schools.

Another P4 million would go to food assistance, healthcare, medical missions and burial assistance, among others.

The remaining amount would be for livelihood programs for farmers and fishermen (P1.5 million), procurement of electric fans for public schools (P400,000) and P1.3 million for Eastern Visayas Regional Medical Center (EVRMC) in Tacloban City, National Kidney Institute, Philippine General Hospital and the Department of Social Welfare and Development in Manila.

The FB post did not give any details on the P20 million to be allocated for infrastructure projects.

Good to be transparent

As of Wednesday, the posting generated 224 “likes” and 38 comments.

Robert Trani Mendoza wrote that posting the PDAF details indicated that “transparencies in all the transactions/projects are being seen by his constituents.”

Bong Altair Laurel also wrote that it was good for the lawmaker to use his Facebook account to inform the people of the province where their money goes. “It’s always good to be transparent,” Laurel commented.

Espina told the Inquirer that he decided to post information about his PDAF after it had been described as counterproductive and graft-tainted.