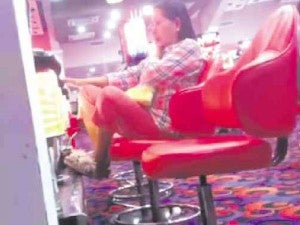 It’s turning out to be the longest 36 seconds in the life of Virginia Torres.

The assistant secretary of the Land Transportation Office (LTO) is under fire after a video surfaced on YouTube showing Torres—or someone who strikingly looked like her—in front of a slot machine at an undisclosed casino.

Malacañang has already ordered Transportation Secretary Emilio Abaya, Torres’ superior, to “look into it.” The LTO is an attached agency of the Department of Transportation and Communications (DOTC).

Memorandum Circular No. 8 issued by the Palace in 2001 prohibits heads of agencies and departments from staying or playing in casinos.

“The ones who have the responsibility to impose any sanction are the heads of departments, bureaus and offices,” presidential spokesperson Edwin Lacierda said on Thursday. “I spoke to Secretary Abaya and … he said he would look into it.”

Abaya said in a text message that his office was “carefully looking at things.”

He said: “DOTC to investigate and eventually render a report to Malacañang.”

The poorly taken video shows a woman resembling Torres sitting in front of a slot machine, her feet propped up at its base, while she apparently manipulates the controls on its screen. Newer slot machine models have touch screen capabilities. The casino is not identified.

Torres has admitted in a television interview that she was in a casino “way back” while having dinner with a friend. She said she was drawn by the slot machine’s lights and sat in front of it and read the instructions.

It was not clear in the TV interview if she said that she played or not.

Torres did not return calls from the INQUIRER asking for her comment. Her office directed the Inquirer to LTO spokesperson Jason Salvador, who said Torres was out of town for work. 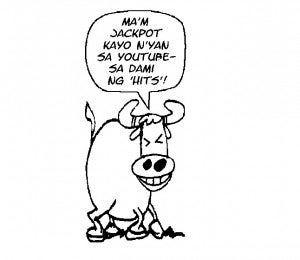 Torres, reportedly a shooting buddy of President Aquino, was appointed to her current post in July 2010.

The Palace seemed not keen on asking Torres to take a leave of absence while the investigation is going on.

“There is such a thing as due process,” Lacierda said, when asked if Torres would be sacked.

“Secretary Abaya will provide (her) due process. He will look into it first,” Lacierda said. “Of course, she will be asked (first). That’s the process—you can’t just fire her immediately. There’s a process for looking into this.”

Told that it was President Aquino who appointed Torres to the LTO, Lacierda said: “We haven’t talked to the President about that but Secretary Abaya will be the one to look into this.”

Lacierda said he wasn’t aware whether the DOTC or the LTO had already come up with penalties for violations of the Circular No. 8.

Netizens clobbered Torres in light of the video. Many urged her to resign.

The news broke out on social media Wednesday night after netizen juan dela cruz posted the video on Youtube.

User Mon Mayuga posted on the Inquirer’s Facebook page: “If LTO Chief Torres went inside the casino, she already violated Memorandum Circular No. 8. She should be fired, even if she is a firing buddy of President Aquino.”

Netizen joseglenpastora said: “The Civil Service Commission said Torres could be suspended for up to 6 months if she is found violating government regulations against going to a casino. Wake up good Presidential Commission on Good Government/Ombudsman/CSC. Do your job and take action now!”

“Now we know where our taxes go. Suspension is not enough! Resign!” commented Netizen Thunukhab Khayub.

Reader jorgi0550 posted on the Inquirer.Net’s comments section: “This nonsense is being used to deviate from the more important issue at hand, [businesswoman Janet Lim-] Napoles and the pork scam. Why investigate it? It’s clear in the video and she even admitted her guilt so just fire her and let’s all move on. Back to the pork scam and Napoles please.”

Twitter user Negastarr (@Negastarr) was curious about Torres’ religious affiliation and its restrictions, saying: “I thought INC members are prohibited from gambling?”

On the other hand, FB user Leo Gona Pedarse believed karma would decide Torres’ fate: “Let’s leave her alone, she must have been aching to gamble and unwind because of huge amounts of pressure in work. Let THE karma judge her.”

Some netizens joked about the issue’s connections to the country’s transportation problem.

“This is why cars in the Philippines don’t have stickers nowadays, the LTO chief is enjoying herself in the casino. Bang!” Limwell B. Francisco (@KingsleyChoi) tweeted.

“That is why I don’t see many cars with plate numbers, because the LTO chief is busy in the Casino,” tweeted Renan Omela (@RenanOmela).

Said netizen Edgardo Cunanan: “It doesn’t show that she’s really playing … Let’s not be prejudiced … give her the benefit of the doubt…”

Lee Soriano commented: “Let’s not make a big fuss over this, but let us immediately resolve this. If it was her, she needs to justify. If the explanation isn’t valid, sanction or replace her as per what regulations prescribe.”