Nissan to have self-driving car on market in 2020 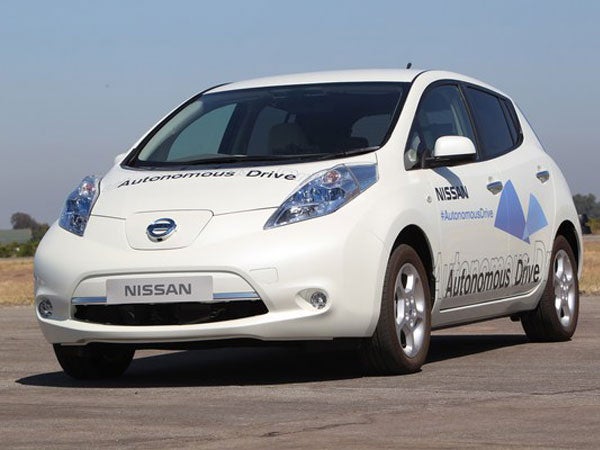 This photo released by Nissan Motor Co., Ltd. follows an announcement on August 27, 2013 that the company will be ready with multiple, commercially-viable Autonomous Drive vehicles by 2020. Nissan announced that the company’s engineers have been carrying out intensive research on the technology for years, alongside teams from the world’s top universities, including MIT, Stanford, Oxford, Carnegie Mellon and the University of Tokyo. AFP

WASHINGTON – Motorists could go hands-free, leaving their cars’ computer brains fully in charge, as early as 2020, when Nissan says it plans to have a self-driving vehicle ready for the market.

The Japanese automaker said Tuesday that its “revolutionary” self-drive technology could be ready by then, and that it is already building a synthetic cityscape of real roads and buildings for testing the vehicles.

“I am committing to be ready to introduce a new ground-breaking technology, Autonomous Drive, by 2020, and we are on track to realize it,” chief executive Carlos Ghosn said Tuesday.

Nissan, which broke ground in 2010 with the introduction of its Leaf fully electric small car, said it is aiming to build a self-driving car that can be sold at “realistic prices.”

“The goal is availability across the model range within two vehicle generations,” the company said in a statement.

Nissan said it is already testing how to extend its Safety Shield technology, which uses a 360 degree system of cameras and sensors to help drivers park and avoid collisions.

Autonomous Drive would enhance safety and accident avoidance, and allow drivers who spend hundreds of hours commuting every year to make more productive use of their time.

It will also give the elderly and disabled much more freedom and mobility, the company said.

Nissan next year will complete the construction of a proving ground for self-driving cars in Japan.

“Featuring real townscapes – masonry, not mock-ups – it will be used to push vehicle testing beyond the limits possible on public roads to ensure the technology is safe,” the company said.