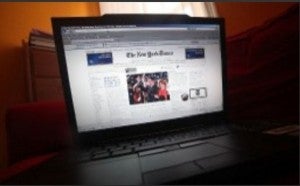 The website nytimes.com, one of the most influential sources of news in the country, came up blank for many readers, though some were still able to access it.

The paper acknowledged the continuing problems, saying on Twitter: “If you can’t access http://nytimes.com , we are also publishing at http://news.nytco.com.”

On Tuesday the Syrian Electronic Army (SEA), supporters of Syrian President Bashar Assad who have hacked a number of media websites and their Twitter accounts, claimed responsibility for the attack on the Times as well as one on Twitter itself.

The group apparently directed the attack via an Internet domain name registry firm, Melbourne IT, that serves both the Times and Twitter.

The Australian company’s own blog had only this message Friday “Hacked by SEA, Your servers security is very weak.”

Marc Frons, the Times’ chief information officer, said the outage was “the result of a malicious external attack” and also credited the Syrian Electronic Army, “or someone trying very hard to be them,” the Times itself reported.

Twitter also pointed to an attack on its domain name registry.

The hack attacks came as the United States geared up for possible military action against Assad’s regime as punishment for what Washington says is unquestionable evidence it used chemical weapons against civilians in the country’s grinding 29-month war.

The SEA has made itself known in recent months, hacking the Twitter account of The Associated Press to put out a false tweet saying President Barack Obama had been hurt in two explosions at the White House.

SEA has also targeted the Twitter account of the AFP photo service, as well as social media at the BBC, Al-Jazeera and the Financial Times and Guardian newspapers.

On its own web site the SEA said it defends the Syrian Arab people from campaigns led by Arab and Western media.