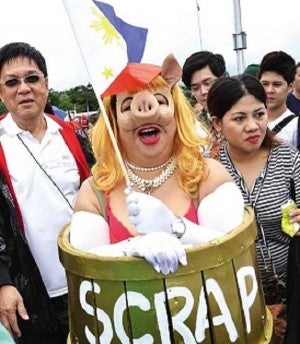 MANILA, Philippines—Ripples of skepticism spread nationwide from various sectors and individuals, including Church leaders and netizens, who could not help but think that the surrender of businesswoman Janet Lim-Napoles to President Benigno Aquino III was played out from a poorly written script.

Whistle-blower Rodolfo “Jun” Lozada accused Malacañang of giving preferential treatment to Napoles, saying that if the country’s most powerful man can provide security to a fugitive accused of pocketing P10 billion in people’s money, the same presidential courtesy should be extended to those who exposed her alleged wrongdoings.

Lozada, who testified against senior government officials in connection with the anomalous $329-million NBN-ZTE deal during the Arroyo administration, noted that the President had yet to speak with principal whistle-blower Benhur Luy and other witnesses who squealed on Napoles’ activities.

Retired Archbishop Oscar Cruz said he was surprised at the turn of events that led to Wednesday night’s surrender of Napoles, the alleged mastermind behind the P10-billion pork barrel scam.

“I’m amazed at the script of the whole drama. Meaning to say, one day someone announces a reward for the capture of somebody. Then later that somebody surrendered to none other than to the one who offered the reward,” Cruz said.

“In so many words, this whole telenovela has become a joke than a drama. I hope I’m wrong,” he added.

Manila Auxiliary Bishop Broderick Pabillo said Napoles should not spare allies of the President who also connived to pilfer the Priority Development Assistance Fund (PDAF), pork barrel. “It’s not only the previous administration that was involved but also the present one. That fact should be accepted,” he said.

“She must cooperate with the team that will investigate her. She must tell everything because all of us want to know the truth. I pray that the holy spirit will guide her to tell the truth,” Basilan Bishop Martin Jumaod said.

Lingayen-Dagupan Archbishop Socrates Villegas said “her being under government custody now is a step in the direction of justice. The direction is RIP or Reject corruption, Investigate fully, and Prosecute immediately.”

“It is the beginning of honesty for the sake of common good. Let us watch what will happen to the money. It is only the beginning,” Jaro Archbishop Angel Lagdameo said.

Activist Mae Paner, popularly known as Juana Change, posted on Facebook: “Noy himself escorted a fugitive. Special? Is that right? The Napoles teleserye is unfolding. Napoles is a crook, she should be treated in a humane way. But special? Hmmmm … .”

Renato Reyes, secretary general of the militant Bagong Alyansang Makabayan, said the latest developments seemed to be intended to put Mr. Aquino, under pressure to abolish all pork barrel funds, in a good light.

Kabataan Rep. Terry Ridon said the people should be wary that the whole surrender scenario could have been staged-managed. “The surrender seems among the ‘calculated tactics’ of the Palace to defeat the public outrage and deflect the increasing pressure on the President to give up his own pork,” Ridon said.

In Zamboanga City, Napoles’ elder brother Ronald Lim said he was surprised at her surrender but heaved a sigh of relief because she was no longer a fugitive.

“We didn’t know her plans because we lost communication since she went into hiding” Lim told the Inquirer.

He said the surrender would give Napoles a chance to answer the allegations against her and that the family was hoping she would be given fair treatment. “What they have been saying against her were not true,” he said.

Lim was arrested on Sunday by agents of the Philippine National Police Criminal Detection and Investigation Group at Bonifacio Global City in Metro Manila. He was mistaken for his younger brother, Reynald, who was also the subject of an arrest warrant.

He said Napoles’ arrest also proved that she did not flee, following reports that she had purchased airline tickets. “One of my nephews used her credit card to buy the tickets,” he said.

“We should not be surprised if Napoles’ scripted surrender results in a whitewash of the evidence against administration allies implicated in the pork barrel scam,” the group said in an e-mailed statement. “We will not be fooled by lies, spins and teledrama scripts.”

In Davao City, Juland Suazo, spokesperson of the environmentalist Panalidpan-Southern Mindanao, said the surrender was an “ex-deal” between Napoles and the Aquino administration whose “ultimate objective was to dispel the public anger and to keep the pork barrel system intact.”

“It was expected … because P-Noy and his cohorts who cannot give up their pork barrel stand to gain more from the media blitz,” said the Alliance of Concerned Teachers (ACT).

Bayan Muna Rep. Carlos Zarate said the surrender “may lead to a political witch-hunt aimed against the opposition.”

“There is a perception now that this latest incident on the Napoles saga will be followed by a ‘political witch-hunt,’ with Napoles as the main weapon, against members of the opposition and other personalities not aligned with the interest of the Aquino administration,” Zarate said in a statement.

Some sectors in Cebu, Iloilo and Negros Occidental provinces also questioned the President’s move to receive Napoles and personally escort her to Camp Crame.

Sam Prudente, one of those actively supporting the Iloilo Supports the #MillionPeopleMarch and now #IloiloPadayon against the pork barrel system, said Napoles’ surrender in Malacañang shows “how well oriented she is with the halls of power and the privileges that come with it.”

Environmentalist lawyer Gloria Ramos of the Movement for a Liveable Cebu said she was disappointed by the apparent special treatment given to Napoles.

Ramos, a supporter of the Cebu peaceful gathering against pork barrel, said the President should have distanced himself from Napoles, considering that the businesswoman’s network could involve some politicians belonging to his party.

“Why P-Noy? Why does she have that much influence to surrender to the President? Something is fishy,” said Ann Ledesma, a peace advocate in Negros Occidental.

Singer Jim Paredes (@Jimparedes) echoed the sentiments of netizens: “Does Napoles get the P10M for surrendering?”

“Those who steal the people’s money through the Priority Development Assistance Fund, or pork barrel, should be exposed and be held accountable,” Santos said.

In Nueva Ecija, Cabanatuan Bishop Sofronio Bancud said Napoles should be accorded due process so additional pieces of evidence may be uncovered and lead to other culprits in the controversial P10-billion pork barrel scam.

“I’m sure they can gather more evidence so no one should get off the hook,” Bancud said in Filipino on Thursday. “The tuwid na daan (straight path) should have no shortcuts … We need to make those accountable to own up responsibility.”

“The straight path should be straight, right and truthful and should apply to all,” he added.

‘Oppression of the poor’

In Nueva Vizcaya province, Bayombong Bishop Ramon Villena condemned public officials involved in the misuse of pork barrel funds, saying this was “oppression” of the people, especially of  the poor.

In a statement aired over the Church-run radio station dwRV, Villena expressed unity with the public outrage over abuses on the spending of lawmakers’ PDAF, which, he said, must lead to punishing all parties responsible for the scam.

“This is oppression and injustice in the highest degree. Thus, we reiterate our unity with our people with organizations and groups in their vigilance for truth and transparency,” he said.

He said his diocese was supporting actions toward a “speedy, thorough, transparent and truly credible investigation” of the pork barrel anomaly.

“We are one with our brothers and sisters who have started this move to shake up and awaken the whole country again toward justice, transparency and accountability in the use of public funds,” he said.  With reports from Julie Alipala, Allan Nawal and Karlos Manlupig, Inquirer Mindanao; Carine Asutilla, Carla Gomez, Nestor Burgos Jr. and Joey Gabieta, Inquirer Visayas; Tonette Orejas and Armand Galang, Inquirer Central Luzon; Melvin Gascon and Yolanda Sotelo, Inquirer Northern Luzon; and Ramon Royandoyan in Manila

Roxas: Napoles in airconditioned prison cell, but no ‘special treatment’

From Malacañang to Camp Crame to Makati City Jail