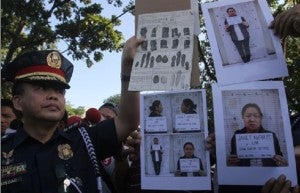 MANILA, Philippines – The planned “livestreaming” to monitor Janet Lim-Napoles inside her detention at the Fort Sto Domingo in Laguna has been delayed  due to “limited bandwidth,” a Philippine National Police spokesperson said in an interview over Radyo Inquirer 990AM on  Monday.

Senior Superintendent Reuben Theodore Sindac, PNP-Public Information Office chief, said they were already setting up a close-circuit television  (CCTV)  camera for internal monitoring which will hopefully follow a “livestream” or a live internet broadcast for the public.

Sindac said they are studying the possibility of a livestream based on the recommendation of Interior Secretary Mar Roxas II.

“Ito ay gagawing available sa publiko. Ang problema na nakita lang limited kasi ang bandwidth doon. Kasi sa livestream kailangan mataas, mabilis, walang delay (We will make it available to the public. The only problem is the limited bandwidth [in the camp]. Because in livestream, [bandwidth] should be high, [connection] should be fast and without delay),” Sindac said.

Sindac said the livestream will give the public an “inside view of the detention center.”

In the meantime, the PNP-PIO chief has been posting, in social media, updates about Napoles, including names of her visitors and the condition of her health.

For more reports, listen to Radyo Inquirer 990AM.

Napoles’ blood pressure shoots up due to claustrophobia