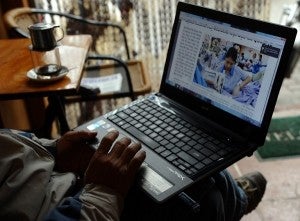 WASHINGTON – Amid growing fears about online surveillance and data theft, Americans are increasingly taking steps to remove or mask their digital footprints on the Internet, a study showed Thursday.

The Pew Research Center report said 86 percent of US Internet users have taken some steps to avoid online surveillance by other people or organizations.

Despite these precautions, 21 percent of online adults in the survey have had an email or social media account hijacked and 11 percent have had information like Social Security numbers or financial data stolen.

The report said 12 percent of those using the Internet have been stalked or harassed online, and six percent have been the victim of an online scam and lost money.

According to the study, 50 percent of Internet users say they are worried about the amount of personal information about them that is online — a figure that has jumped from 33 percent in 2009.

“Users clearly want the option of being anonymous online and increasingly worry that this is not possible,” said Lee Rainie, director of the Pew Research Center’s Internet Project and an author of the report.

“Their concerns apply to an entire ecosystem of surveillance. In fact, they are more intent on trying to mask their personal information from hackers, advertisers, friends and family members than they are trying to avoid observation by the government.”

The survey found some 64 percent of online adults clear “cookies” which store information, or their browser history and 41 percent have disabled cookies.

Some delete material they have posted in the past, create usernames that are hard to tie to them, use public computers to browse, or give inaccurate information about themselves.

Roughly 14 percent of the users survey said they at times encrypt email and 14 percent say they use services like virtual networks that allow them to browse without being tied to a specific Internet protocol (IP) address.

“Our team’s biggest surprise was discovering that many Internet users have tried to conceal their identity or their communications from others,” noted Sara Kiesler, an author of the report and a faculty member at Carnegie Mellon University.

Most Web users said would like more control over their personal information, saying in many cases it is important that only they or the people they authorize should be given access to their emails, their contacts, their locations and the content of what they download.

“These findings reinforce the notion that privacy is not an all-or-nothing proposition for internet users,” said Mary Madden, a Pew researcher. “People choose different strategies for different activities, for different content, to mask themselves from different people, at different times in their lives. What they clearly want is the power to decide who knows what about them.”