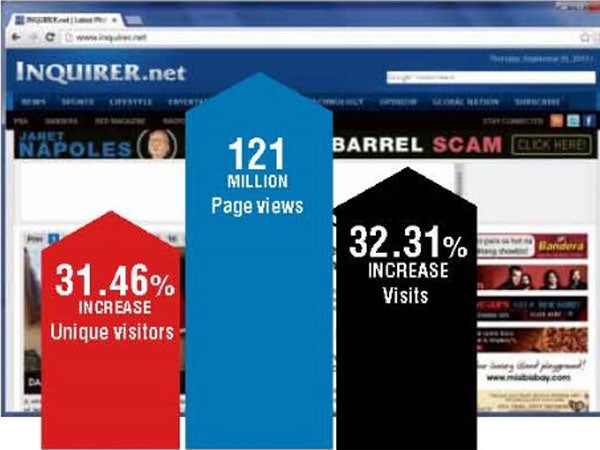 From July 12 to August 31, a period of 51 days, these stories generated for the Inquirer website a total of 121,016,410 page views, according to statistics provided by Google Analytics.

The figure represented a 42.7-percent jump from the site’s average page views.

The number of unique visits to the site during the period rose 32.3 percent, while unique visitors increased 31.4 percent.

July 12 marked the start of the Inquirer series on the pork barrel scam, allegedly masterminded by businesswoman Janet Lim-Napoles.

This scoop by the Philippine Daily Inquirer, this year’s biggest news story so far, provided a big spike in INQUIRER.net’s traffic during the period.

Napoles, who surrendered to President Benigno Aquino on August 28 after two weeks in hiding, is now detained at Fort Sto. Domingo in Sta. Rosa, Laguna, in connection with the serious illegal detention of Benhur Luy, her cousin and former employee in JLN Corp.

Luy is the principal witness in the P10-billion pork barrel scam involving Napoles’ fake nongovernment organizations and the Priority Development Assistance Fund (PDAF) of at least five senators and 23 members of the House of Representatives over the past 10 years. 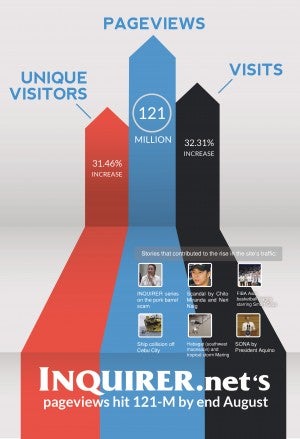 FIGURES based on Google Analytics from July 12 to Aug. 31. INFOGRAPHICS BY MARK FERDINAND CANOYOF INQUIRER.NET

Luy and the witnesses, all former employees of Napoles, said kickbacks accounted for up to 65 percent of the pork barrel, officially called the PDAF, public funds for the pet projects of lawmakers.

The scam outraged Filipinos, who called for the scrapping not only of the PDAF but also the pork barrel system. Tens of thousands gathered at Rizal Park in Manila in the leaderless Million People March on August 26 to protest the misuse of public funds. Other protests were staged in many parts of the country.

Other stories that contributed to the huge rise in the site’s traffic include the sex video scandal involving musician Chito Miranda and his girlfriend Neri Naig, the Fiba Asia basketball league that starred the Smart Gilas Pilipinas team, the ship collision off Cebu City, the devastation wrought by habagat (southwest monsoon) and Tropical Storm “Maring,” and the State of the Nation Address by President Aquino.

The publication of the verbatim transcripts of the round-table discussion between Napoles and the Inquirer staff in the newspaper’s editorial offices in Makati City saw a dramatic jump in Web traffic.

The first part of the five-part series drew close to 11,000 shares within the first two hours of posting.

The videos of that meeting also elicited the same result as far as page views and shares in social media are concerned.

The level of engagement readers spend on the site has also been credited to the jump in the site’s traffic. It’s not unusual to read one article, particularly if it’s one of the big news events cited earlier, drawing as many as over 200 comments from readers within an hour after posting.

Google Analytics is a service offered by Google that generates detailed statistics about a website’s traffic and traffic sources and measures conversions and sales.

The product is aimed at marketers as opposed to webmasters and technologists from which the industry of Web analytics originally grew. It is the most widely used website statistics service.