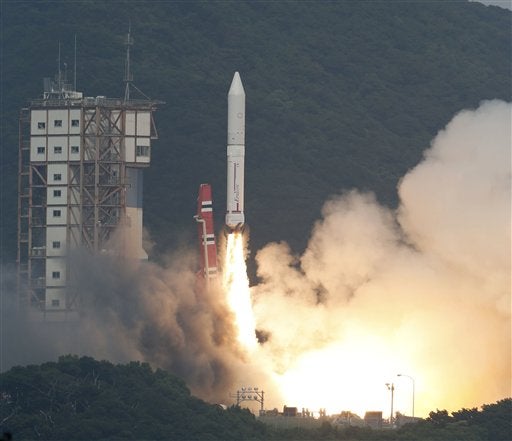 An Epsilon rocket lifts off from the Uchinoura Space Center in Kimotsuki town, Kagoshima, western Japan Saturday. Japan launched the new rocket it hopes will be a cheaper and more efficient way of sending satellites into space, following a two-week postponement. AP

TOKYO—Japan launched a new rocket Saturday that it hopes will be a cheaper and more efficient way of sending satellites into space.

The three-stage Epsilon lifted off from a space center on Japan’s southern main island of Kyushu, following a two-week postponement. An earlier launch last month was aborted 19 seconds before a planned liftoff due to a computer glitch.

About an hour later, its payload — the SPRINT-A, the first space telescope designed to observe other planets — was successfully put into orbit, said Mari Harada, a spokeswoman at the Japan Aerospace Exploration Agency, or JAXA.

The liftoff was broadcast live on television networks, with footage showing a white, pencil-shaped rocket shot into the sky from the launch pad after spurting gray smoke and orange flash.

The Epsilon is the first new rocket design for Japan since the H2A was introduced in 2001. The H2A remains Japan’s primary rocket but officials hope the Epsilon will lead to improvements in the more costly H2A program. Japan hopes to be more competitive in the international rocket-launching business.

JAXA said the Epsilon costs about 3.8 billion yen ($40 million), one-third the cost of the H2A. The rocket is about 24 meters (80 feet) tall, half the size of the H2A, and can be assembled and readied for launch in just one week, one-sixth of the time required for the H2A.

The Epsilon rocket, which uses a solid-fuel propellant, is meant to expand the scope of space missions Japan hopes to perform. It also streamlines the launch process.

JAXA says the rocket’s extensive use of computer technology means monitoring work that once required a full-staff control room can be done essentially on a single laptop.