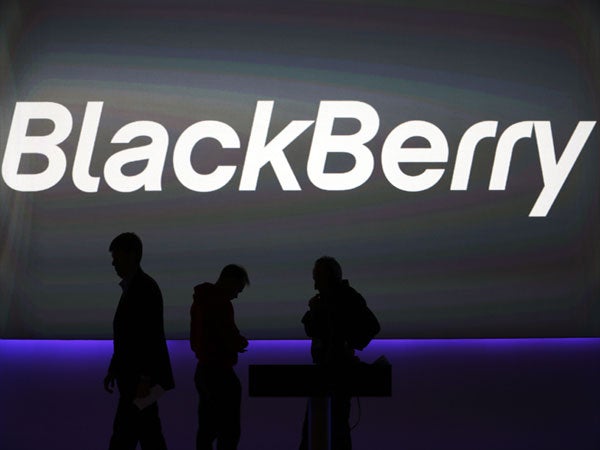 In this Wednesday, Jan. 30, 2013, file photo, blackBerry’s employees prepare the launch event for the company’s new smartphones in London. Fairfax Financial Holdings has offered to buy BlackBerry in a deal that values the Canadian smartphone company at about US$4.7 billion on Monday, Sept. 23, 2013. AP

OTTAWA—Tech pioneer BlackBerry made a last roll of the dice Monday and agreed to a probable $4.7 billion buyout by a consortium planning to take the struggling smartphone maker private.

BlackBerry was once a leader in mobile tech but has been squeezed by rivals Android and Apple, which coincidentally announced record sales of its latest iPhone on Monday.

The Ontario-based company said it had signed a letter of intent with a group led by Fairfax Financial Holdings Limited, which has offered to acquire the company.

Fairfax, a Canadian firm headed by billionaire Prem Watsa, is already BlackBerry’s largest shareholder with approximately 10 percent of its shares.

Watsa resigned from BlackBerry’s board in August when it announced a search for a suitor.

Watsa said the sale “will open an exciting new private chapter for BlackBerry, its customers, carriers and employees.”

“We can deliver immediate value to shareholders while we continue the execution of a long-term strategy in a private company.”

Ironically, the announcement came on the same day that Apple said it sold a record nine million iPhones in three days after launching two new versions of its smartphone last week.

Under the proposed BlackBerry-Fairfax deal the consortium would offer $9 for each outstanding share, and Fairfax would contribute its own shares in the transaction.

BlackBerry said its board supports the plan.

A firm deal, once due diligence is completed, is expected by Nov. 4. It also hinges on the consortium obtaining financing.

BlackBerry said it would continue a search for a possibly better suitor in the interim.

BlackBerry stock was down six percent to $8.23 before trading was halted just prior to its announcement.

Its shares bounced back in afternoon trading to close at $9.08 but remain far below the stock’s historical high.

While BlackBerry helped create a culture of mobile users glued to smartphones, many have since moved to iPhones or devices using Android software like Samsung’s Galaxy range.

According to International Data Corporation, BlackBerry’s global market share had slipped to 3.7 percent in the second quarter, the lowest since tracking began.

The company, formerly known as Research In Motion, unveiled a new corporate name and a new platform in January as it sought to regain momentum, but its most recent numbers suggest this has been a spectacular failure.

On Friday, the company announced it was laying off 4,500 staff—or one-third of its global workforce—after a dismal launch of new smartphone models earlier this year.

It predicted a nearly $1 billion second-quarter loss due to poor sales of its new Z10 touchscreen smartphone, which was aimed at competing with Apple and Android’s flagships.

Gold and other analysts said going private—and possibly returning company founder Mike Lazaridis at the helm—would give the firm room to “put the house in order.”

Going forward, BlackBerry would be a much smaller player in handheld devices, but Gold said “being private would mean Wall Street is not continuously breathing down their neck.”

Furthermore, its key enterprise customers may not feel compelled to replace their BlackBerry servers for fear that the company is going out of business.

“It could provide them with cover to re-architect the company even more than they are now,” said Gold.

Boston University professor N. Venkat Venkatraman said the company could attract firms like IBM, HP or Dell if it focused on business communications, not private consumers.

The company’s sustainability, however, would still remain in doubt.—Michel Comte

TOPICS: Blackberry, Buyout, Canada, Company, invest, telecom
Read Next
Tesco joins tablet computer market
EDITORS' PICK
Current dominant strain of COVID-19 more infectious than original—study
Smart releases Hyun Bin’s second TVC
EuroMillions Superdraw: A lottery draw unlike any other is coming to the Philippines
‘Justice will be done,’ Duterte assures as he vowed probe on Jolo incident to bare ‘truth’
Water remains our saving grace right now
DOLE: Return of OFWs’ remains from Saudi to be ‘delayed,’ deadline moved to ‘early next week’
MOST READ
Duterte tells military: No other president looked at you the way I did
Locsin warns of ‘severest response’ if China’s army drills in SCS ‘spill over’ to PH domain
BREAKING: Duterte signs anti-terror bill into law
Vico: Cleanup of bidding process saved Pasig gov’t P415M
Don't miss out on the latest news and information.