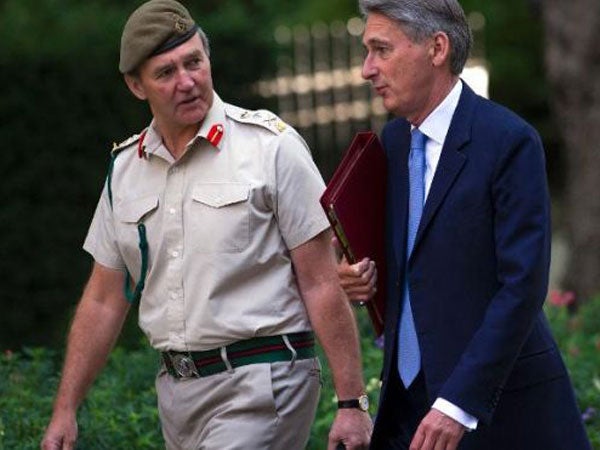 British Defense Secretary Philip Hammond (R) walks with Britain’s Chief of the Defense Staff, General Nick Houghton, as they arrive in Downing Street ahead of a meeting of the National Security Council in central London on August 28, 2013. British Prime Minister David Cameron was set to chair a meeting with top ministers and defense chiefs of the National Security Council on August 28 to discuss a response to the Syria crisis in the wake of a chemical weapons attack that Washington, London and Paris believe was carried out by the Syrian regime. AFP

LONDON – Britain is to set up a dedicated military unit to counter cyber attacks, the defense secretary announced Sunday as he issued a call for tech-savvy new recruits.

The Ministry of Defense is looking to recruit hundreds of computer experts to help defend Britain’s national security.

The “cyber reservists” would work alongside regular forces in the new Joint Cyber Reserve Unit in a bid to protect key computer networks and safeguard data.

The new capability would be able to “counter-attack in cyber-space and, if necessary, to strike in cyber-space as part of our full-spectrum military capability,” Prime Minister David Cameron’s Conservative Party said.

The center-right party kicks off its annual conference on Sunday.

“In response to the growing cyber threat, we are developing a full-spectrum military cyber capability, including a strike capability, to enhance the UK’s range of military capabilities,” the Conservative Defense Secretary Philip Hammond said.

“Increasingly, our defense budget is being invested in high-end capabilities such as cyber and intelligence and surveillance assets to ensure we can keep the country safe.”

“The cyber reserves will be an essential part of ensuring we defend our national security in cyber-space.”

“This is an exciting opportunity for Internet experts in industry to put their skills to good use for the nation, protecting our vital computer systems and capabilities.”

As well as targeting regular personnel leaving full-time roles and existing reservists with the right skill set, Hammond hopes to attract experts who would not otherwise consider joining up. Recruitment starts in October.

In January, parliament’s defense scrutiny committee warned in a report that the British military’s dependence on information technology meant it could be “fatally compromised” by a cyber-attack.

The committee heard evidence that cyber-attacks could disrupt military communication and information systems, radars and satellites, and leave combat units such as planes or ships dysfunctional.

The MPs expressed concern that the government did not have a back-up plan in the case of a failure of technology, instead focusing on averting such attacks in the first place.