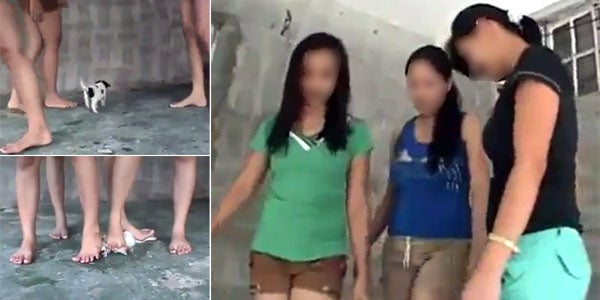 Screengrab from the ‘crush video’

MANILA, Philippines—A new “crush video” is making the rounds on social media showing three girls in shorts stomping on a wailing puppy until it died.

The barefoot women, whose faces were shown on the video, are allegedly Filipinas.

It caught the attention of the Philippine Animal Welfare Society (PAWS), which has launched a search for the women and other people involved in the production of the video.

“If someone can actually give us the names and addresses of the people in the video, we can file the case immediately,” the animal welfare group said, adding it has forwarded the video to the Bureau of Animal Industry-Animal Welfare Division.

“Crush videos” are sexual fetish films in which small animals are maimed or killed through extreme brutality. Cruelty to animals is punishable under Republic Act 8485 or the Animal Welfare Act of 1998.

“Crush videos” first surfaced in the Philippines in 2011 as scantily clad girls crushing to death small animals were sold as fetish films online.

A couple in Bacnotan, La Union was caught that year for hiring girls aged 12 to 18, who tortured and killed animals in crush films sold for P100 to P1,000 per video.

Reward up for couple behind ‘crush’ videos