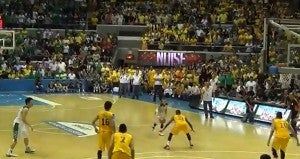 MANILA, Philippines — Fans were outraged by a scalper peddling at least 160 pieces of overpriced tickets for the UAAP men’s basketball game two in a buy-and-sell website.

User PaulAnthonyOlarte posted an advertisement on Sulit.com.ph on Friday, detailing the prices and the number of tickets available for La Salle and University of Santo Tomas’ clash on Saturday at Smart Araneta Coliseum.

INQUIRER.net tried to call the contact number posted along with the ad, but it could not be reached.

Below are some of the reactions on Twitter to the offer:

Even Tigers’ guard Jeric Teng was bewildered by how scalpers would get their hands on so many number of tickets when those who line up were only allowed to purchase one.

“Instant yaman ng mga scalpers. How do they get to much tickets?” Teng said in a post (@jericteng16).

In a tweet, Smart Araneta Coliseum (@TheBigDome) said that it was only releasing two tickets per person, and reminded everyone to bring their IDs.

But customer service representatives over at Ticketnet’s hotline said that that purchasers were not required to show proof that they were from either La Salle or UST.

“Hindi na po. Kahit po walang ID pwede po bumili basta po two tickets lang per person [It doesn’t matter. Even if they don’t have IDs, they can buy as long as it’s two tickets per person],”  the representative said.

Ticketnet also hasn’t confirmed whether it was releasing standing room only (SRO) tickets on game day itself.