MANILA, Philippines—Things left unsaid at the Ayala rally were freely, wantonly expressed on social media, the birthplace of the Million People March against the pork barrel.

A running thread was the question of funds—not about the Malampaya Fund but who was funding the rally.

Wrote netizen Lieo Gonzaga:  I’m just curious who funded this rally. The stage and the quick approval of the rally in the city of makati in the middle of ayala is confusing. I think someone who wants the President [to] be removed so as to stop the pork barrel investigations against the senators and congressmen involved and have something to do with this. Of course without Aquino, no investigations. No investigations, pork barrel lives. And who wants pork barrel? Obvious answer.”

Netizen Edron B San Juan added: “This is what we called “Diversionary” tactics, now forget PDAF scam, and concentrate to DAP and impeachment of Pnoy, what the hell with our thinking Filipinos…. tsk… tsk… tsk…”

Some netizens wondered why there were no effigies of Senators Juan Ponce Enrile, Jinggoy Estrada and Ramon Revilla Jr., who were among those charged with plunder for alleged misuse of the Priority Development Assistance Fund (PDAF).

“If Jun Lozada and Bishop Oscar Cruz are scheduled to talk, that is a dead giveaway of the real intentions of this rally.” 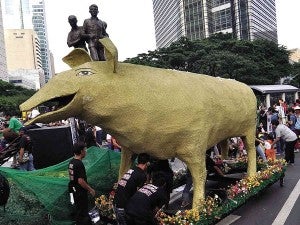 A huge golden pig made of papier-mâché serves as the mascot of Friday’s Million People March on Ayala Avenue, Makati City. The rally called on business leaders to join the fight for the abolition of the graft-tainted pork barrel. RICHARD REYES

A netizen who used the name  “pilipino yourstrulypo” said:

“These leftist-led rally is shooting the guy they found selflessly cleaning up the mess that others before him have left behind while the real and documented culprits (Jinggoy, Enrile, Revilla, Napoles, Pangandaman, Nieto, Anday, Gloria, etc.) are thankfully giggling in the shadows.”

Netizen Bonil Antiola commented on activist Mae Paner, aka “Juana Change”: “(HEr)  credibility is gone. With all these leftist and mga hakot na BINAY-YARAN side to side with her. Baka tayo ang na FOOLISH ni Juana Change.”

Netizen Michael Ieyasu has a suggestion: “What we need is the passage of the FOI Bill. We don’t need to abolish the Pork Barrel if the FOI Bill is passed into law. It was passed already in the Senate. What we need is to make these Congressmen schedule a meeting to discuss the FOI Bill. It should be televised live. Never again should they reason out that there is no meeting room. THE FOI BILL IS MORE IMPORTANT THAN ABOLISHING THE PORK BARREL.”