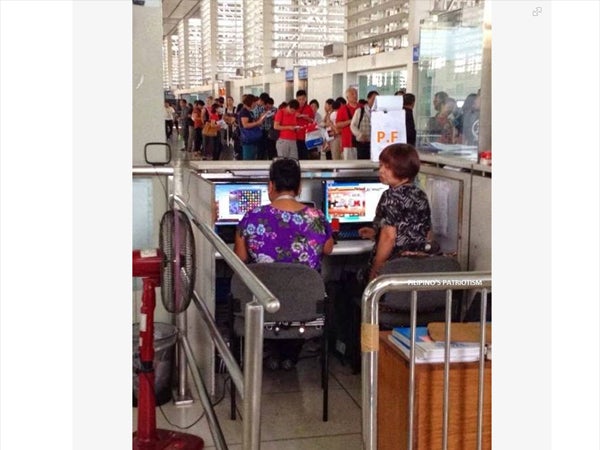 MANILA, Philippines—Looks like even government employees have more fun in the Philippines—even during working hours.

A photo circulating on the social networking site Facebook shows just that—two women behind a counter at Ninoy Aquino International Airport (Naia) are playing video games while a long line of passengers clogs an airport entrance.

One netizen said on Monday the photo may explain why Naia had been dubbed by a travel blog the world’s worst air terminal for three successive years.

The photo that started circulating from the Filipino Patriotism Facebook page was posted on Sunday.

As of Monday, the picture had already amassed more than 4,000 shares and more than 1,000 comments. And it seems the numbers are growing.

The blog, in an Oct. 20 post titled “Naia employees playing at work,” credited the photo as “courtesy of a Fashion Pulis reader.”

Airport officials who declined to be identified because they had no authority to speak to the media told the Inquirer that the two unidentified women were workers at a Philippine Overseas Employment Administration counter on the north wing of Naia Terminal 2.

The counter is where departing overseas Filipino workers have their overseas employment certificates stamped, one of the sources said.

The source said the airport management had no direct supervision over employees of another government agency.

“We can make only a recommendation,” the source said, adding: “Their attention has been called and we hope they’ll do something about it.”

Netizens expressed their outrage on seeing the photo. Some started pitching their “horror stories” about Philippine government employees.

Facebook user Jessie Tedlos said in Filipino: “In my experience, almost all government employees are rude (suplado/suplada). People like that should be fired. They have so much work to do but they prioritize video games.”

Another Facebook user, Renzo Del Mundo, said, also in Filipino: “Employees like that should be replaced. They bring shame to the Philippines. That’s why we keep getting the No. 1 worst airport tag.”

Asked whether the women might have been on a break, the airport source said: “We have no information on when the photo was taken but even during a break, that counter should be manned. And they shouldn’t be playing games while at work.”

“We’re sad this happened just when a blog named us the worst airport,” the source lamented.—With a report from Kristine Angeli Sabillo, Inquirer.net