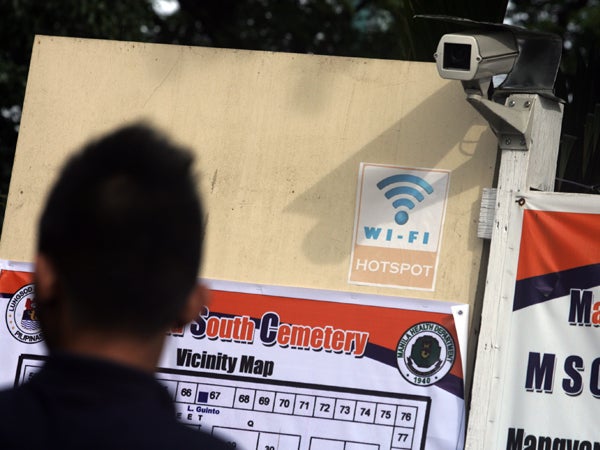 MANILA, Philippines – Things have become a little more high-tech at one of Metro Manila’s biggest public cemeteries, in the heart of Makati City.

For All Saints’ and All Souls’ Day, the Manila South Cemetery administration has opened a free WiFi Internet service.

Another advancement: a computerized database of those buried at the cemetery, and the locations of their tombs.

On Friday, a “data verification” table was set up near the gates, to assist visitors who may need directions to their loved ones’ final resting place. At least six laptops connected to the database were laid out on the table, manned by cemetery staff.

Signs listing down the available free WiFi connections, and their passwords, were also posted on the table.

Of the 300,000 to 400,000 people buried in the cemetery, 90 percent have been included in the database, cemetery administrator Daniel Tan told the Philippine Daily Inquirer in an interview.

“We have also installed closed-circuit television cameras, and implemented a name-tag system for the kids,” he added.

But the reminder was also clear about who initiated these changes, and under which local government the cemetery falls under.

For one, the main gate of the Manila South Cemetery is now festooned with a giant sign  bearing the faces of Tan, newly elected Manila Mayor Joseph Estrada and Manila Vice Mayor Franciso “Isko Moreno” Domagoso.

The same sign, in sticker form, decorated the laptops at the data verification table.

Netizens were quick to note this, when the Inquirer posted a photo on Twitter. Twitter user “gypsypen” summed it up: “Okay na sana yung service eh pero kelangan talaga may mga mukha nila?” She ended the post with “#EPAL.”

The much advertised WiFi connections, as of noon, had overloaded and eventually bogged down.

By noon, the cemetery has seen 50,000 visitors through its gates, with Tan saying he expected the number to balloon to 500,000 in the following days.

Tan said the number was low compared to last year. He attributed the low numbers to those taking advantage of the long weekend to visit their home provinces instead.