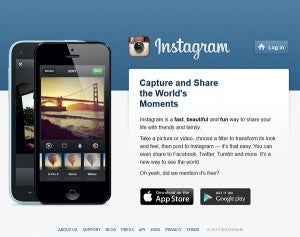 The first ad to pop up was a sponsored photo of a Michael Kors ladies’ watch, artfully displayed on a table set elegantly for coffee and biscuits.

The caption read “Pampered in Paris.”

“Michael Kors ran the first ad on Instagram this morning, targeting women in the US in a certain age range,” Instagram said in reply to an AFP inquiry.

The image had garnered more than 181,000 “likes” by late Friday, along with some bitter remarks from Instagram users.

US Instagram users will see the ad even if they aren’t followers of the Michael Kors brand at the service.

Instagram has about 150 million active users, Facebook executives said in a conference call on Wednesday to discuss earnings in the recently-ended quarter.

Facebook is carefully adding magazine-quality photo ads to Instagram as it hopes to bring in revenue from the service without alienating users.

Facebook on Wednesday reported stellar quarterly earnings results, but told analysts that internal metrics indicated that teenagers may be falling out of love with the social network.

The world’s leading online social network reported profit of $425 million in the quarter that ended on September 30, compared with a loss a year earlier.

The earnings figures showed soaring advertising revenue, nearly half of it from smartphones or tablet computers.

The third quarter results for the California-based firm were well ahead of most forecasts, with revenues rising sharply to $2.016 billion.