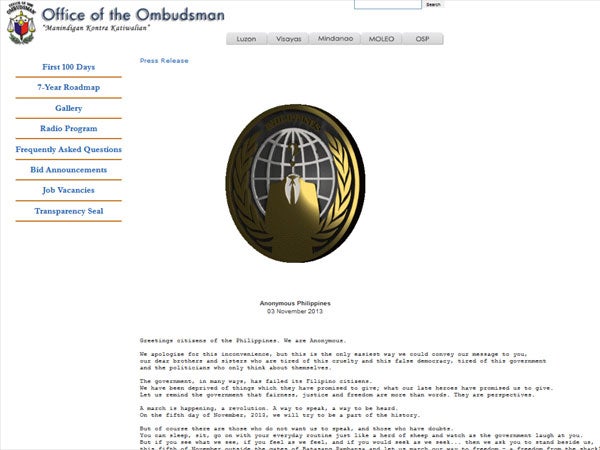 MANILA, Philippines – Activist hacker group Anonymous Philippines on Sunday hit another government website, defacing it with their logo and a letter calling on the public to join a November 5 protest.

The Office of the Ombudsman’s homepage appears normal but its latest update reads “Anonymous Philippines.”

Clicking on the said text redirects to a post with the hacker group’s animated logo and a letter blasting the government.

“We apologize for this inconvenience, but this is the only easiest way we could convey our message to you, our dear brothers and sisters who are tired of this cruelty and this false democracy, tired of this government and the politicians who only think about themselves,” it read.

“The government, in many ways, has failed its Filipino citizens…Let us remind the government that fairness, justice and freedom are more than words.”

The letter further calls on the public to join Anonymous and the protest on November 5 outside the House of Representatives.

On its Facebook page, Anonymous Philippines claimed to have hacked more than a dozen government websites, mostly from local government units, on Sunday. The pages also showed the letter and the logo.

Their latest post shows an invite for a “Million Mask March” at the Batasang Pambansa (House of Representatives) in Batasan Hills, Quezon City on November 5, 10 a.m.

It said the protest was a “peaceful march to meet and greet like-minded individuals.”

In August, the Department of Science and Technology said they might launch a centralized web hosting service for government websites after at least 30 of their Internet domains were hacked on August 26, during the “Million People March” against the controversial Priority Development Assistance Fund (PDAF).

Word war to slugfest? Teves dares Villafuerte to a fistfight