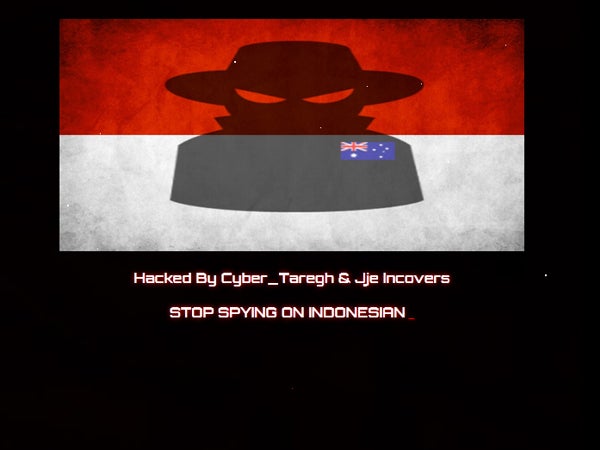 SYDNEY – Activist group Anonymous Indonesia on Monday claimed it had defaced more than 170 Australian websites to protest at reports of Canberra spying on its nearest neighbour and strategic ally.

“Hundreds of Australian Websites Attacked for #OpAustralia By Indonesian Hackers,” it posted on Twitter, listing the sites which appeared to be mostly small businesses that ended with the Australian domain .au.

Calling up the web pages was met with the message: “Stop Spying on Indonesia” underneath an Indonesian flag imprinted with a black graphic of the face of Guy Fawkes, whose image is used as a mask by Anonymous internationally.

The sites appear to have been selected at random, covering businesses involved in everything from catering to dry cleaning and bouncy castle hire.

Australia’s relationship with close neighbour Indonesia is under pressure after reports last week that Canberra’s overseas diplomatic posts were involved in a vast US-led surveillance network.

Missions in Indonesia, as well as embassies or consulates in China, were reportedly used to monitor phone calls and collect data, sparking demands for an explanation from Jakarta and Beijing.

On Sunday, The Guardian newspaper cited a document from US whistleblower Edward Snowden showing Australia and the US also mounted a joint surveillance operation on Indonesia during the 2007 UN climate change conference in Bali.

The Australian government has said it does not comment on intelligence matters.

Anonymous is believed to be a loosely organized hacker collective that conducts online attacks internationally, most recently in Singapore on Friday when a newspaper website was defaced over Internet freedom in the city-state.