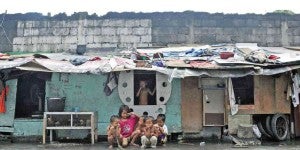 An estimated 10.4 million Filipino families described themselves as poor, while around 8.5 million families said they were food-poor over the past three months, according to a recent survey by the Social Weather Stations. INQUIRER PHOTO

MANILA, Philippines —Young software developers in the Philippines are coming up with app ideas to solve the problems of government in an international competition sponsored by Microsoft.

“[Microsoft] Imagine Cup, which is currently on its 12th year, is the world’s premier student technology competition,” Karrie Ilagan, Microsoft Philippines General Manager, said Tuesday during the launch of the national leg of the competition.

“Eligible students are invited by Microsoft to use their imagination and passion to create a technological solution that breaks new ground and solves tough problems that face the world today,” she said.

To help student participants focus on how they will develop software that can solve problems in government, Microsoft has partnered with the Department of Science and Technology (DOST) Information and Communication Technology Office (ICTO).

Mon Ibrahim, Deputy Executive Director of DOST-ICTO said that there is a lot of great talent among the Filipino software developers.

“[We crafted a long list of] priority problems that we are hoping student [developers] can focus on. [But for this competition] we trimmed it down to three: health, environment, and e-government,” Ibrahim said.

In the domestic IT industry, there are almost 900,000 workers in the Information and Communication Technology industry, he said.

Louie Casambre, executive director of DOST ICTO said in his welcoming remarks that “Philippines is actually one of the largest suppliers of IT talents in the world … but we don’t have an Apple, or a Microsoft.”

Ibrahim said that Filipino software developers “are primarily in the United States, Middle East, Japan, New Zealand, Australia, among others,”

Several previous participants of the Imagine Cup competition shared their personal ideas that can help the Philippine government solve some of its most pressing problems.

Marion James Pilande, 23, graduate of DLSU College of St. Benilde and part of the team that represented the Philippines to the international leg in 2010 and 2011, said that he wants to create a centralized government database for all its agencies to access in providing services to the public.

“Centralizing this would not just reduce the cost of infrastructure, storing information, but it would actually make the processes go faster,” he said.

Pilande and his team’s entry was an app called LIGTAS which stands for “Location-based Information Gathering for Tragedy Elevation System.” Their web-based app brings together crucial information for rescuers during disasters and even allows for donations to be coursed through it.

Their app is still active and was used by a relief-NGO during the Bohol earthquake, he said. 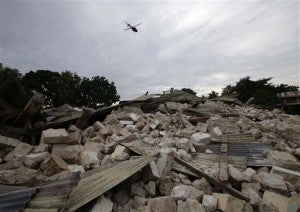 Earthquakes like in Bohol and Cebu have become a yearly occurrence in the Philippines. AP file photo

Paul Villena, 20, from Adamson University, said that he wants to create a software that will serve as a database of scholarships nationwide. He said that this would help the less fortunate to seek out and apply for scholarships to any school nationwide.

Cesar Cuaresma, 27, from University of the Philippines Diliman said that he is thinking of an official weather app for the Philippine Atmospheric, Geophysical and Astronomical Services Administration (Pagasa).

“It will be a Filipino App made for Filipinos,” he said. Their app uses brightly colored backgrounds to show the current weather condition in a certain place in the Philippines.

The app, which is still in the development stages, will use weather information from Pagasa and make it easier to understand for users of the app, he said.

Gigi Adamantopolous, 21, from De La Salle University, said that her app aims to prepare kids in knowing what to do in the event of disasters.

The app is a type of game that gives points when they give the correct answer for certain disaster situations, she said.

It could also be used by barangay (village) officials where they can compete against other barangays in accumulating points on who is better in disaster response.

“Microsoft’s Imagine Cup is vital to promoting the science and technology capability of our student developers in achieving innovations that are geared towards delivering economic and social benefits,” Casambre said.

“We look forward to more partnerships like this with Microsoft in order to sustain the development of programs that harness the talents and skills of Filipinos in science and technology,” he said.