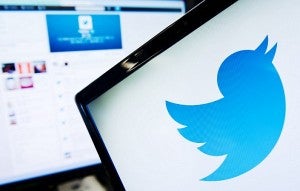 Twitter set a price of $26 per share for its initial public offering on Wednesday evening and will begin trading Thursday under the ticker symbol “TWTR” in the most highly anticipated IPO since its Silicon Valley rival’s 2012 debut.

The price values Twitter at more than $18 billion based on its outstanding stock, options and restricted stock expected to be available after the IPO. That’s more than Macy’s, which has a market capitalization of $17 billion, and Bed Bath & Beyond, which is valued at around $16 billion. Facebook Inc.’s value, meanwhile, stood at $104 billion at the time of its IPO.

Twitter, named after the sound of a chirping bird, got its start 7 years ago, first with Jack Dorsey and then Evan Williams as CEO. Its current chief is Dick Costolo, a former Google executive who once aspired to be a stand-up comedian. On March 21, 2006, Dorsey posted the world’s first tweet: “Just setting up my twttr.” Noah Glass, who helped create Twitter posted the same words just 10 minutes later.

Since then, the social network that lets users send short messages in 140-character bursts has attracted world leaders, religious icons and celebrities, along with CEOs, businesses and a slew of marketers and self-promoters.

Tempering expectations was a big theme in the weeks leading up to Twitter’s IPO. The company tried to avoid the trouble that plagued Facebook’s high-profile offering. Facebook’s public debut was marred by technical glitches on the Nasdaq Stock Exchange. As a result, the Securities and Exchange Commission fined Nasdaq $10 million, the largest ever levied against an exchange. Those problems likely led Twitter to the NYSE.

Twitter is also likely hoping for a first-day pop of its shares that eluded Facebook’s stock. Facebook’s shares closed just 23 cents above their $38 IPO price on their first trading day. They traded below $38 for more than a year.

Still, $18 billion is a lofty valuation for Twitter compared with its peers. At its IPO price, Twitter valued at roughly 28 times its projected 2013 revenue —$650 million based on its current growth rate. In comparison, Facebook trades at about 16 times its projected 2013 revenue, according to analyst forecasts from FactSet. Google Inc. meanwhile, is trading at about 7 times its net revenue, the figure Wall Street follows that excludes ad commissions.

Research firm Outsell Inc. puts Twitter’s fundamental value at about half of the IPO price, says analyst Ken Doctor. That figure is based on factors such as revenue and revenue growth.

“That’s not unusual,” Doctor says. “Especially for tech companies. You are betting on a big future.”

One of Twitter’s biggest challenges as a newly public company will be to generate more revenue outside the U.S. More than three-quarters of Twitter’s 232 million users are outside the U.S. But only 26 percent of Twitter’s revenue comes from abroad. The company has said that it plans to bring in more international revenue by hiring more sales representatives in countries such as Australia, Brazil and Ireland.

The pricing means Twitter raised $1.8 billion in the offering before expenses. Twitter was offering 70 million shares in the IPO, plus an option to buy another 10.5 million. If all shares are sold, the IPO will raise $2.09 billion, making it the biggest IPO for an Internet company since Facebook raised $16 billion last year.

Twitter, which has never turned a profit in 7 years of existence, had originally set a price range of $17 to $20 per share for the IPO, but that was an obvious lowball designed to temper expectations. It was widely expected that the price range would go higher. Back in August, for example, the company priced some of its employee stock options at $20.62, based on an appraisal by an investment firm and it’s unlikely to have lost value since.

On Monday, Twitter raised the price range to $23 and $25 per share, signaling an enthusiastic response from prospective investors. That its final price was above the expected range bodes well for the company.

As is customary on the NYSE, there will be a human designated to ensure that Thursday’s IPO is not marred by technical glitches. Earlier on Wednesday, Barclays Capital said Twitter had hired it to be its “designated market maker,” a critical role when a stock starts trading. A DMM is an experienced trader who supervises the trading of a company’s stock on the NYSE. If technical problems arise, the NYSE uses DMMs to bypass electronic trading systems, allowing people to trade a company’s stock. That is not possible on all-electronic stock exchanges such as the Nasdaq.