Netizens have fun in ‘Napoles Zone’ 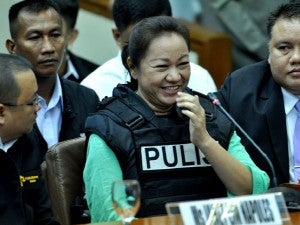 Welcome to the “Napoles Zone.”

A virtual limbo, the zone is created when a person refuses to tell another what the real score is between the two of them.

The phrase surfaced in the social media following the more than five-hour testimony of Janet Lim-Napoles on Thursday at the Senate blue ribbon committee.

She refused to answer senators’ questions about her alleged partners and her modus operandi in the alleged P10-billion pork barrel scam.

Disappointed with Napoles’ “I don’t know” and “I invoke my right against self-incrimination” responses, netizens came up with the term Napoles Zone, which they likened to  nowhere land one found oneself in a hilarious way.

In fact, netizens had a fun time giving examples of the zone.

“The boy has just landed on #NapolesZone.”

Another is an example of someone who has been “NapolesZoned.”

“Q: Why can’t I breathe when I think about you?

“A: I invoke my right against self-incrimination. #NapolesZoned.”

At the hearing, Napoles, the alleged mastermind of the scam that used dubious nongovernment organizations to siphon off the pork barrel of lawmakers released to government agencies for livelihood projects, faced the Senate blue ribbon committee to deny the charges.

Also present at the hearing were Napoles’ former employees, led by Benhur Luy, who revealed her alleged schemes in a series of exposés on the Philippine Daily Inquirer.

Napoles denied being close to Luy.

The hearing was aired live on radio and television. It was also a trending topic (#Napoles) on social media where netizens were busy dissecting Napoles’ words and demeanor.

The arrival of Miriam Defensor-Santiago, the feisty senator, practically injected an adrenaline rush among the netizens.

But blogger The Professional Heckler said Napoles met her fate at the hearing.

“The moment Janet Napoles sympathized with those shady senators and congressmen sealed her fate in history,” he said.

The Inquirer hashtag #Napoles landed among the trending topics on Twitter on Thursday. Santiago landed as the 7th global trending topic during the two hours that she grilled Napoles.—Reports from Ramon Royandoyan and Denison Dalupang