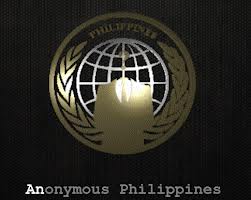 The suspect was identified as information technology student Rodel Plasabas alias “Reaper,” “Anonymosbutuan,” “Anon Reaper” of Butuan City. He was arrested by NBI operatives Wednesday night in Butuan City after days of surveillance.

Plasabas is also suspected to be a leader of Anonymous Philippines.

Armed with a search warrant, the agents collared Plasabas for violation of RA 8792 (E Commerce Law).

“He was on line when the search warrant was issued. Initial check on his current chats indicated discussions on website hacks,” De Lima said.

The suspect will be taken for inquest before the Butuan City Prosecutors’ Office.

Early this month, 38 government websites were hacked in protest of the Disbursement Acceleration Program of the Aquino administration.

Anonymous is a loose international organization of political activist hackers.

NBI says it has traced at least 20 ‘hacktivists’