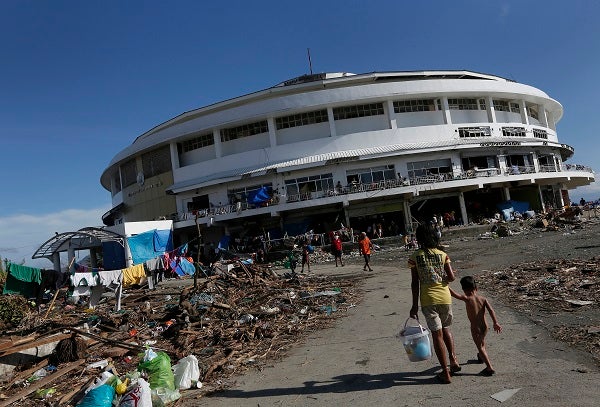 A young girl walks her brother to the Tacloban City Convention Center known as the Astrodome Thursday, Nov. 14, 2013, where hundreds of displaced typhoon survivors have set up makeshift shelters throughout the complex’s once bustling shops and popular basketball court. The United Nations has activated a constellation of satellites to help relief operations in the typhoon-ravaged Philippines, an official said on Thursday. Data gathered can identify roads, bridges or railway lines and buildings that are passable or structures that are damaged or intact. AP PHOTO/VINCENT YU

PARIS—The United Nations has activated a constellation of satellites to help relief operations in the typhoon-ravaged Philippines, an official said on Thursday.

Under the Charter, 15 space agencies or national organizations agree to pool 25 ground-imaging satellites to help relief efforts hampered by a natural catastrophe, such as a storm, earthquake or tsunami.

Their data can identify roads, bridges or railway lines that are passable or structures that are damaged or intact.

“The charter was activated by the United Nations and its Office for the Coordination of Humanitarian Affairs,” said Proy, whose organization is part of the Charter group.

“It was activated almost preventively. The first discussions took place on Thursday, the day before the typhoon crossed the Philippines,” Proy said in an interview with AFP.

“The satellites were re-tasked on Friday, the day when the cyclone hit.”

The UN is an “authorized user” of the Charter, giving it the right to invoke it.

Once activated, space technicians under a rotating arrangement determine which satellites are available and best suited for the job, and then send a program request to the operator for images.

Satellites take the pictures as they fly over a zone, giving this mission a priority over other jobs. The data are usually available within 24 hours and are provided for free.

The maps are put together by UNOSAT, a Geneva-based UN institute that specializes in satellite applications, which then disseminates it to aid agencies that request them.

“Around 10 satellites have been requested, particularly optical satellites,” said Proy.

The first job was to identify undamaged buildings, especially in Tacloban, that could be used by relief organizations, she said.

“We have now moved more towards Cebu and Bogo but there are also requests to cover areas that are much, much farther west, on other islands,” said Proy,

“It’s very complicated for everyone,” she said.

“The biggest problem is that there is a huge area of destruction. To cover it, we need high-resolution images, but these have a limited scale of 20 kilometers by 20 kilometers (12 miles by 12 miles).

“So right now we are only partially mapping the affected areas. We are also encountering problems with cloud cover, as it is the middle of the cyclone season.”