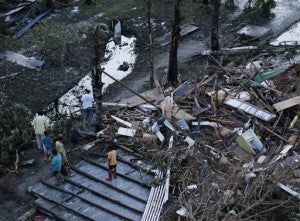 To sympathize with those affected by the recent calamity caused by the onslaught of Supertyphoon “Yolanda,” Smart Communications opted for a modest event to mark the introduction in the Philippines of the latest iPhone models. AP

MANILA, Philippines—To sympathize with those affected by the recent calamity caused by the onslaught of Supertyphoon “Yolanda,” Smart Communications opted for a modest event to mark the introduction in the Philippines of the latest iPhone models.

“We planned a bigger event. But because of the changed circumstances, we went for a simple launch,” Ramon Isberto, head of Smart’s public affairs team, told members of the media yesterday at the Top Shelf of Fully Booked’s Bonifacio High Street branch in Taguig City.

Smart will roll out the iPhone 5c and 5s models starting today in all its stores across the country.

And as part of Smart’s efforts to alleviate the plight of the typhoon survivors, Isberto said the United Nations Children’s Fund (Unicef) and two other organizations will set up booths in pick-up locations for online applicants.

The organizations’ booths will collect donations from subscribers who will pick up their units from the satellite locations.

Approved applicants who registered online during the sign-up period may get their units at the Eastwood Mall Open Park in Quezon City, or at the Jump Experience Center in SM City Cebu and SM Lanang Premier in Davao.

“We now have the most advanced smartphones in our lineup, and we have been leading in establishing a future-proof network ready for the surge in uptake of such devices,” he shared.

Kathy Carag, head of Smart’s postpaid services, showcased a menu of packages for the new iPhone units. The telco giant offers the iPhone 5c in 16GB and 32GB models, and the iPhone 5s in 16GB, 32GB and 64GB models.

Smart Infinity Business Group Head Julie Carceller also said free units, gift certificates and vouchers will be given to Smart Infinity subscribers who will get the latest iPhone models today.