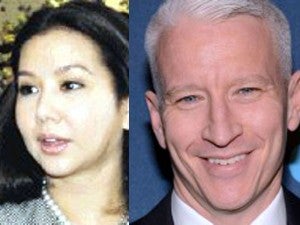 Call it a virtual catfight, a non-issue, or a case of taking things personally, but the recent tit for tat between CNN broadcast journalist Anderson Cooper and ABS-CBN news anchor Korina Sanchez had netizens and TV viewers momentarily distracted from the grim images of the devastation left by Supertyphoon “Yolanda.”

Sanchez had earlier bashed Cooper over his critical reporting on the government’s slow response to the aftermath of Yolanda in Tacloban City. The CNN broadcaster responded in kind in an exchange that provoked a storm of comments from netizens, most of whom chided the two news personalities for their sideshow in the midst of a national disaster.

In his eponymously named program on CNN aired live from Manila yesterday morning, Cooper said of Sanchez’ earlier remarks: “A radio broadcaster named Korina Sanchez has taken issue with some of my reporting.  She also is not just a radio broadcaster; she also happens to be the wife of the Interior Minister (Secretary Manuel Roxas II) who is overseeing the relief effort on the ground. Miss Sanchez seems to be under the mistaken impression that I said I saw no presence of Philippine government on the ground in Tacloban. I never said that.”

Sanchez had criticized Anderson in her radio program on Wednesday afternoon on DZMM after he reported on the government’s less than stellar response to the needs of Yolanda survivors.  Said the ABS-CBN news anchor: “Itong si Anderson Cooper, sabi wala daw government presence sa Tacloban. Mukhang hindi niya alam  ang sinasabi niya. (This Anderson Cooper. He said there was no government presence in Tacloban. It seems he doesn’t know what he is saying).”

Sanchez’s remarks became a hot topic on Twitter, something that Cooper was not about to let slip by.  Said the CNN journalist: “Here’s what I actually said: As for who exactly is in charge of the Philippine side of operation, that is not really clear. I am just surprised. I expected on this Day Five, I thought I may have gotten here very late, that things will be well in hand; it does not seem like that. People are desperate, they do not have any place for shelter. It’s very difficult for people to get food, neighbors are helping out neighbors, water is in short supply, it is a very very bad situation here.”

Cooper, who arrived in Manila on Monday, took a dig at Sanchez for not being on the ground to do her reporting. “Miss Sanchez is welcome to go there (Tacloban City) and I would urge her to go there. I don’t know if she has, but her husband is the interior minister and I’m sure she can arrange a flight,” he added.

Cooper was unaware that Sanchez had been deployed to Ormoc City, another town devastated by Yolanda, on Thursday night, her first time to see the destruction in the region.  Sanchez’s coanchors in the news program “TV Patrol,” Ted Failon and Noli de Castro, had flown to Tacloban City earlier—Failon on Thursday, while De Castro had been there since Monday.

The Inquirer sought out Sanchez for comment, but her talent manager GR Rodis said she was “out of reach.”  Sanchez, Rodis said over the phone, was “busy distributing relief goods either in Samar or in Northern Cebu. She told me her signal would be spotty.”

An ABS-CBN insider, who refused to be named due to lack of authority to speak on the issue, said both Failon and De Castro shared Cooper’s observation about the government’s slow response in the aftermath of Yolanda’s fury.

Cooper said that as a journalist, he made it a point to be as “accurate as possible” in his reports to “help people on the ground become more efficient.”

He added: “Accuracy is what we care most about here at CNN.”

Stressed the news anchor:  “I saw the work being done and the work that is not being done.”

Cooper also took on President Aquino’s comments on the foreign media’s unflattering coverage  of the government’s relief efforts, specifically the President’s “counsel” that reports by foreign journalists should not only be accurate but must also be able “to uplift the spirit of the Filipino people and show stories of resilience and hope and faith,  and show the world how strong the Filipinos are.”

Netizens too, had a field day, tweeting about the issue.

“It’s embarrassing for Filipinos that the wife of a high govt official is the source of so much division at a time when we should be united,” said netizen @Article8Jester.

“Korina Sanchez should have the guts to go to tacloban and see the disaster for herself. Because saying something without the proof is BS,” said netizen  @LanceLim27.

“@andersoncooper gets all emotional as he talks about how strong Filipinos are. Just wanna go to him right now and hug him,” said  netizen  @NickeyyDees.

“She reported in ormoc not in tacloban. She should do her reporting in tacloban without a face mask and smell the stench like Mr. Cooper.,” said netizen Jay Labayo.

Some netizens opted to look beyond the Sanchez-Cooper  virtual catfight.