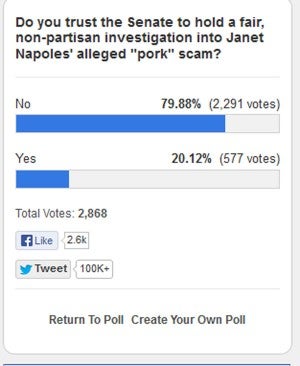 MANILA, Philippines – After Janet Lim-Napoles appeared in the Senate investigation into the pork barrel scam last November 8, Netizens indicated overwhelmingly that they had very little faith in the inquiry.

In an online poll by INQUIRER.net conducted before, during and after the hearing, 79.87% of Netizens or 2,289 of the total 2, 866 votes did not believe that there would be a fair and non-partisan investigation into the scam.

Only 20.13% or 577 of the respondents expressed optimism despite Napoles’ rhapsody of “I don’t know” in the Senate investigation.

Napoles, who has been detained at the Fort Sto. Domingo in Laguna since her surrender to President Benigno Aquino III late August, has been tagged as the mastermind behind the P10 billion scam involving the alleged misuse by lawmakers of their Priority Development Assistance Fund (PDAF) or pork barrel.

Napoles and several lawmakers are facing plunder charges before the  Ombudsman.

Senators fail to get Napoles to spill beans on ‘pork’ scam