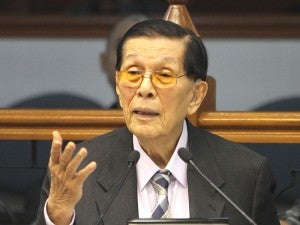 A waste of time, money and energy was the general theme of netizens’ reaction to the privilege speech of Senate Minority Leader Juan Ponce Enrile, who lambasted an “obsessive hater,” supposedly Sen. Miriam Defensor-Santiago, on Wednesday. INQUIRER FILE PHOTO

“Total, total waste of taxpayers’ money. Used his right for personal vendetta. Did country gain from it? Big NO,” @Bessie_2012 said on Twitter.

“Enrile is a waste of taxpayer money. His book a waste of trees,” said blogger Noem Lardizabal-Dado, who uses the twitter handle @momblogger.

“Complete waste of time and taxpayer money. These are the people you vote for, Philippines? Why?” @prodeeboy told @Inq_Opinion.

Netizen @benjobb found the remarks of Enrile “(a)ll ad hominems, nothing substantial. Miriam being crazy or not has nothing to do with.”

@suigeneris05 said the points raised by Enrile were “his personal issue with Sen. Miriam.”

Other netizens heckled Enrile and Santiago.

TOPICS: Juan Ponce Enrile, Miriam Defensor-Santiago, netizens
Read Next
Scammers target would-be Yolanda aid donors
EDITORS' PICK
Garcia softens stance, meets IATF halfway on swab-upon-arrival policy
Want to help local farmers? Shop small and eat Real Food
ICC is everything but a court of ‘white people’
Manila is 78th most expensive city in the world for foreign workers
TeaM Energy pushes development programs to help in pandemic rebound
Piolo Pascual: The Ultimate Heartthrob continues to level up
MOST READ
Sharon Cuneta on living in the US: ‘Nagagawa ko lahat ng normal na bagay’
ICC is everything but a court of ‘white people’
Duterte-Duterte tandem possible but ‘winnability is another question’ — Binay
Mike Nieto asks fans: ‘No below the belt remarks’ toward South Korea
Don't miss out on the latest news and information.