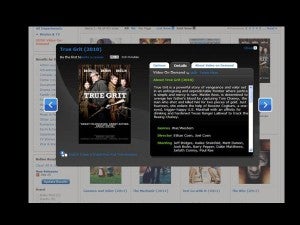 "True Grit" is shown as one of the titles available on Wal-Mart’s new video-streaming service. Wal-Mart bought video-streaming service Vudu.com 18 months ago and now offers 20,000 titles that can be viewed on almost any device with Internet access, from computers to televisions to Sony’s PlayStation3 and other Blu-Ray disc players (AP Photo).

NEW YORK  — Wal-Mart Stores Inc. and Amazon.com Inc. on Wednesday revealed new video and book-reading services that are designed for the iPad but bypass Apple Inc.’s fees on content sales.

Wal-Mart started to stream video from its Vudu service to the iPad’s Web browser, and Amazon announced the Kindle Cloud Reader, which lets users read e-books.

Amazon, the leading seller of e-books, has a Kindle app for the iPad. However, Apple recently forced it to remove a button that launches Amazon’s Kindle website, where users buy books. Apple wants companies to sell their content through its iTunes system, where it gets a 30 percent cut.

Media companies are finding Apple’s fees hard to accept. So they are getting around that by avoiding apps that must be distributed through Apple’s App Store, where Apple’s fee policies apply. Earlier this summer, The Financial Times created an app-like website for its newspaper to avoid Apple’s fees.

The Kindle Cloud Reader is a “Web app,” nearly indistinguishable from a regular app. Users have to go through a few steps to store the app and their books on the iPad. But when that’s done, it’s capable of reading stored books without an Internet connection.

Wal-Mart’s Vudu site relies on streaming video, so it does not work without an Internet connection. The site already works with PC browsers, but the Flash technology used doesn’t work on the iPad. Instead, Vudu is using “Live Streaming” tools from Apple to reach the tablet.

Vudu.com’s business model is similar to Apple’s own iTunes. It rents out movies for $1 to $6 for a 24-hour or 48-hour viewing period. It also sells them for $5 and up, which allows viewing any time. Its claim to fame is that it has many movies on the same day they’re released on DVD.

Edward Lichty, general manager for Vudu, said the site will also work with iPhones and iPod Touches, but the interface could be hard to navigate, because it’s designed for tablets. The movies will even stream over “3G” cellular broadband, but the image quality will suffer, and a full movie would eat a lot of the monthly data allowance that iPad plans usually come with.

Vudu is owned by Wal-Mart Stores Inc. The Little Rock, Arkansas-based retailer bought Vudu a year and a half ago.