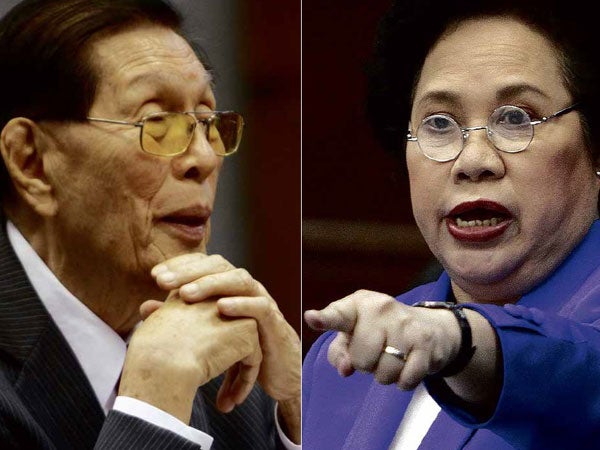 Netizens said they were entertained after watching Sen. Miriam Defensor-Santiago’s privilege speech on Wednesday, but asked, “Is this what the Senate is for?” RAFFY LERMA

MANILA, Philippines—Entertaining but, OMG (Oh my God!), netizens exclaimed after watching Sen. Miriam Defensor-Santiago’s privilege speech on Wednesday, asking, “Is this what the Senate is for?”

“I’ve heard lesser name-calling in a bitter bullying match between 2 kindergarten kids in a playground,” a netizen named happytwit posted on Twitter.

Santiago slammed Enrile in a televised speech and followed by netizens on social media. Until late Wednesday, Santiago and Enrile were trending topics on Twitter.

“There must be a law that tells to imprison the lawmakers who are behaving like this way. These two senators do no good thing for the country but quarreling,” Alfie Balante Alimbon posted on Facebook.

“Like a variety show, entertaining but a total waste of Senate time, this Santiago-Enrile word war,” netizen @stenopadilla said.

Netizen @kathrineheloise said Santiago was merely “rehashing the past.”

“Her finger must hurt after all that pointing,” netizen @woodczar1 noted.

“In the end what do we get from all of this?” asked netizen @Danvin_03.

This is not to say Santiago or Enrile did not have defenders in social media.

“Just like Katniss Everdeen, @senmiriam is on faaayerrrrr! Roar!” netizen @ItsMeMAANyag exclaimed, referring to the lead character in the movie “The Hunger Games.”

Some netizens chose to see beyond the “word war.”

Anne Borromeo posted: “I believe all of us should ponder every word she said … Are these the kind of legislators we have?? We have thieves, womanizers, corrupt, tax evaders, illegal logger, everything a lawmaker of the land should never be. No wonder this country has remained as poor as ever.”—Denison Rey Dalupang