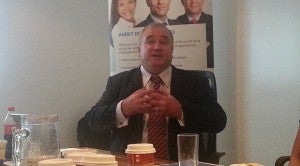 MANILA, Philippines — As mobile and Internet banking services in the Philippines continue to grow and become widely adopted, banks are being left behind in terms of services and interactivity, the annual Bank Readiness Index study found.

“Definitely tablets and smartphones are the new devices that consumers want to interact with,” Dean Young, vice president of product management for SunGard retail banking business, said during the release of the results of the 2013 study.

In the Philippines, tablet ownership has grown by 50 percent while smartphone ownership by 40 percent each year and banks have been quick to invest in establishing channels through these devices, he said.

However, the physical banking experience in branches should back up the digital experience customers get in mobile devices, Young said.

For example, when a customer logs into his bank account over the Internet, he is able to see all the products he is enrolled in. But when the same customer goes into a branch and asks about one of the items in his portfolio, will the bank be able to answer him?

“Probably not,” Young said. “Banks need to catch up and start to make an investment in their branches to catch up with the investment they’ve made in the digital space.”

The always-connected customers who use their mobile devices for many aspects of their daily lives expect to have “improved, integrated customer multichannel experience” from their banks.

Young cited as an example online shopping sites such as Amazon or Ebay where customers shop and purchase online and then get their package delivered to them on time and in good condition. Banks must be able to initiate certain transactions online but finish it in the relatively more secure space of the branch.

According to the study conducted in the third quarter of 2013 that surveyed 1,000 bank customers throughout 10 developing countries in the Middle East and South East Asia (SEA), 95 percent of the respondents still regularly come to the branch to transact.

“Despite high usage, the branch was ranked as one of the top three areas that need improvement, with resolution of complaints cited as the worst part of branch service,” SunGard said in its statement.

Those are among the reasons why the multichannel experience, or what SunGard calls being able to interact with banks whether through the branch, the Internet, the ATM, or even through the phone, needs to be improved.

The Philippines is leading in the topic of bank trustworthiness with 92 percent of Filipinos saying they trust their bank. Young attributed this to the perception of banks as being very sound, not making risky investments, and generally for creating a stable banking environment.

The general average of bank trustworthiness in SEA was only 80 percent.

A great majority of Filipinos, 73 percent, also said they felt their banks understood their needs well. This is the highest throughout SEA which had an average of 60 percent.

Also, more than half of Filipinos, 60 percent, said they were willing to share more personal information with their bank to get better and more personalized service.