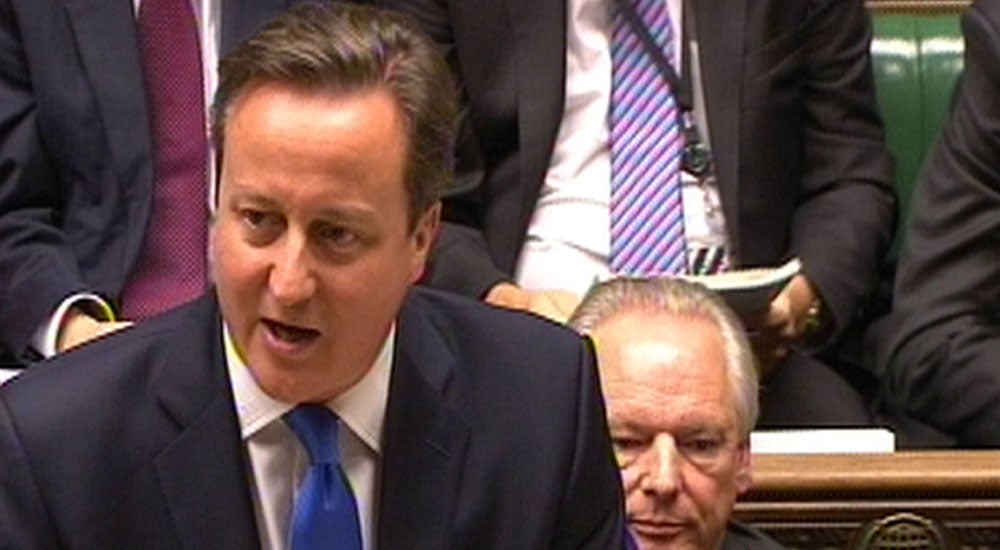 Britain’s Prime Minister David Cameron speaks during Prime Minister’s Questions in the House of Commons, London, in this still image taken from video on Wednesday Dec. 11, 2013. Cameron said he was only being polite when he posed for a “selfie” photo at Nelson Mandela’s memorial service deflecting complaints that he was being disrespectful during the occasion. Cameron joined President Barack Obama and Danish Prime Minister Helle Thorning-Schmidt in a camera phone snap at the service in South Africa on Tuesday. When asked about it in Parliament, Cameron said amid laughter from lawmakers that Mandela brought people together, so he thought it “only polite to say yes” to a request for a photo from Thorning-Schmidt, the daughter-in-law of former Labor leader Neil Kinnock. AP

LONDON—British Prime Minister David Cameron on Wednesday laughed off criticism that he had acted inappropriately by posing for a mobile phone “selfie” with US President Barack Obama at Nelson Mandela’s memorial service.

A photograph of Cameron and Obama leaning in and smiling broadly for a smartphone snap taken by Danish Prime Minister Helle Thorning-Schmidt has caused a storm on social media.

Asked about the picture during his weekly question and answer session in the House of Commons, Cameron quipped that “you should always remember that the television cameras are always on.”

The Conservative leader also joked that he was building political bridges, a reference to Thorning-Schmidt’s marriage to the son of Neil Kinnock, the former leader of the Tories’ arch-rivals Labour.

“Has the prime minister had the opportunity to discuss international mobile phone usage with any European heads of government in the last day or so?” he asked.

To laughs in the chamber, Cameron replied: “You could say in a roundabout way, and, er, perhaps in my defense, you should always remember that the television cameras are always on.

“But in my defense I’d say that Nelson Mandela played an extraordinary role in his life and in his death in bringing people together.

“And so of course when a member of the Kinnock family asked me for a photograph I thought it was only polite to say yes.”

Earlier, Cameron’s spokesman said there had been “plenty of words” from the prime minister and other world leaders celebrating Mandela’s life and achievements during the service at Soweto’s World Cup stadium on Tuesday.

“What the media may choose to report is a matter for yourselves and your colleagues,” the spokesman told reporters.