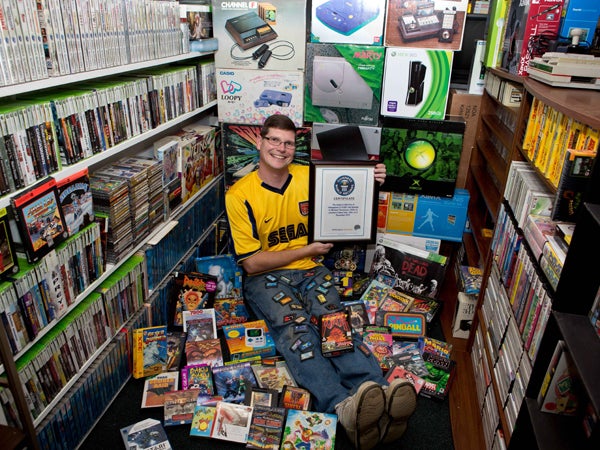 In this Sept. 1, 2013 photo provided by Brianna Blank, Michael Thomasson poses in the basement of his suburban Buffalo home, where he stores his collection of video games. Thomasson is featured in the just-released “Guinness World Records 2014 Gamer’s Edition,” for having the largest collection of video games, 10,607. The number bests the previous record holder, Richard Lecce of Florida, who had 8,616 games in 2010. AP

BUFFALO, New York – Maybe it was getting his first video game, Cosmic Avenger, for Christmas at the age of 12, and then having to wait an entire year for the hard-to-land Colecovision console to play it on that made Michael Thomasson so determined to get his hands on every video game and system he could find.

Now, 31 years and roughly 11,000 games later, Thomasson is the newly crowned world record holder for having the largest collection of video games. He is featured in a two-page spread in the just-released “Guinness World Records 2014 Gamer’s Edition.”

“I have games on cartridge, laser disc. I have VHS-based games, cassette-based games,” Thomasson said, standing among the collection that fills the basement of his suburban Buffalo home.

Along with the games, he has the devices to play them on, not only the Xboxes and PlayStations but obscure ones like the Casio Loopy, the only game system specifically geared toward girls, which came out in Japan in 1995, and the Pippin, a dud released by Apple the same year.

“Every game on it is awful,” Thomasson says of Apple’s foray into the gaming world. “It’s the least fun of anything in the house.”

At the other end of the spectrum is the old Colecovision unit like the one that appeared under the Christmas tree one year after his grandparents gave him his first game for it. They had mistakenly believed his parents had gotten their hands on the playing system, which was a hot item that year. It stands to this day as the best present his parents ever gave him.

“It’s my first love so it’s sentimental,” Thomasson said. But the games also were quality, with very little of the “shovelware” — mediocre, rushed releases — typical of many systems, he said.

“They looked good, they played good. For the time they sounded good,” he said, “for the bleeps and blips of the ’80s.”

Thomasson began collecting almost immediately, he said, but the path to the world record had a couple of restarts. He sold off his collection twice, first in 1989 to raise money for a Sega Genesis, then again to pay for his 1998 wedding. (“I was heavy into collecting when we married so she knew what she was getting into,” he says of his wife, JoAnn.)

Since then, Thomasson has methodically rebuilt the collection, averaging two games per day on a strict $3,000-a-year budget which means never paying full price.

He hasn’t played every game. The father of a 5-year-old, Anna, Thomasson designs games and teaches 2D animation, game design and the history of video games at Canisius College in Buffalo. He also writes on the topic for magazines and books.

“I probably get three hours of playing in a week,” he said. “If I’m lucky.”

Guinness lists the number of games in Thomasson’s record-breaking collection at 10,607, though he said the number exceeds 11,000 now, a year after the official count and after discovering forgotten stashes of games after the counting crew left.

Either way, it bested the previous record holder, Richard Lecce, who held the record first recorded in 2010 with 8,616 games.

“My congratulations to a fellow collector,” Lecce, 39, said by phone from his Florida home upon hearing his record had fallen. “It’s very impressive and I’m very happy for him.”

Lecce began collecting as a way to own all the games he couldn’t have as a kid, he said, and grew to appreciate their place in pop culture.

Still an active collector, Lecce hasn’t counted his games in the last few years and doesn’t know what his number has grown to, but he has no immediate plans to challenge Thomasson for his old record.

“It’s something I did for my own enjoyment. I applied for the Guinness book for my kids so that years from now they can look back and say, wow, my father was in the ‘Guinness Book of World Records,'” Lecce, a father of two and numismatist, a rare coin dealer, said.

“Everything from the original artwork to the actual code that was written for the games to the actual box art and the whole marketing plan,” he said. “It’s just a very undervalued and underappreciated art form.”