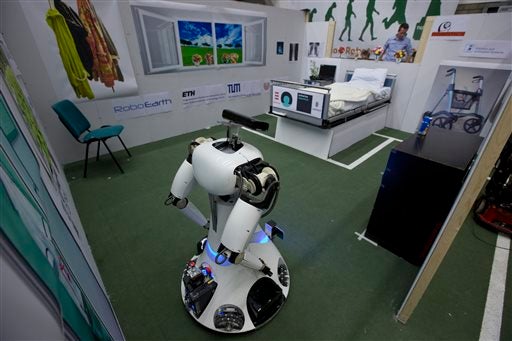 Amigo, a white robot the size of a person, uses information gathered by other robots to move towards a table to pick up a carton of milk and deliver it to an imaginary patient in a mock hospital room at the Technical University of Eindhoven, Netherlands, Wednesday Jan. 15, 2014. A group of five of Europe’s top technical universities, together with technology conglomerate Royal Philips NV, are launching an open-source system dubbed “RoboEarth” Thursday. The heart of the mission is to accelerate the development of robots and robotic services via efficient communication with a network, or “cloud”. (AP Photo/Peter Dejong)

Expectations are high for RoboEarth, a new European-funded system to speed up the development of human-serving robots. Scientists from five major European technical universities have gathered in the Netherlands this week for its launch and to demonstrate possible applications.

The first: the deceptively simple task of delivering a glass of milk to a patient in a mock-up hospital room.

The system is sometimes billed as a kind of Wikipedia for robots, allowing them — or their programmers — to turn to it for information. In a demonstration Wednesday at Eindhoven Technical University, RoboEarth wirelessly instructed a scrappy waste bin-sized robot called “Avi” to scan a room’s physical layout, including the location of the patient’s bed and the placement of a carton of milk on a table nearby.

Then the system activated a second robot, the more humanoid “Amigo,” which used the map provided by Avi to locate the milk, grasp it with a pincer hand and bring it to the side of the hospital bed. That mission accomplished, he dropped it on the floor.

Fortunately, it was a test run and no milk was spilled. Amigo hasn’t been programmed for crying anyway.

The hospital exercise is just the beginning. Organizers say the tasks the robots are carrying out are of a technological sophistication comparable to those performed by high-end robots in automobile factories — they just look clumsier because robots that interact with humans are not performing repetitive tasks in the controlled, sanitized and predictable surroundings of a factory.

The RoboEarth project was years in the making and received around 4 million euros ($5.4 million) in funding from the European Union for interrelated projects at technology conglomerate Royal Philips NV and universities in the Netherlands, Germany, Spain and Switzerland.

Designers of robots can add information to the system, which is then shared for free so that others don’t have to reinvent the electric wheel. For example, if a robot maker wants to program a hand to grasp something, that’s difficult to design. But the coding for three different ways to do it may be there for a robot to plug into on RoboEarth.

But RoboEarth is more than an encyclopedia. It has a system of networked computers that allow it to perform intensive computing tasks that smaller computers — or in this case simpler robots — may not be able to. It also allows individual robots to communicate between themselves, the so-called RoboCloud of networked computers, and the robot database.

“The future in robotics and especially cloud computing is very exciting,” said Gajan Mohanaraja, of the Swiss Federal Institute of Technology at Zurich, which is taking part in the project.

Mohanarajah was one of the core developers of the RoboCloud, sometimes called an “online brain for robots,” which was launched in March ahead of the rest of the project.

“This means we can build very lightweight and cheap robots and completely offload most of the computing to the cloud,” Mohanarajah said.

He showed off a small mapping robot he has worked up with components costing only $500. It can roll along as far as its batteries will take it, registering its environment and uploading the data to the cloud. It could be considered a miniature, stripped-down version of one of Google’s Street View cars.

Sascha Griffiths of The Technical University of Munich describes the technology his team has developed: digitizing human speech, then sending it to the RoboCloud for interpretation. What they’ve built couldn’t compete with Apple’s Siri, but it doesn’t have to: the current demonstration is limited to understanding requests a person in a hospital bed might make.

All the programming is free to use and can be developed further by anyone who wants to participate in the project.

“We only ask that people who use RoboEarth and to gather information or make improvements send what they’ve done back to the system for other people to use too,” saod Heico Sandee, the program manager.