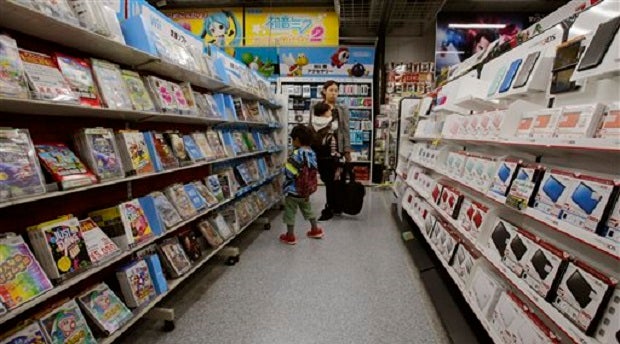 In this photo taken Sunday, Dec. 15, 2013, shoppers walk through the sales floor of Nintendo 3DS video game software at an electronics store in Tokyo. Nintendo Co. says its profit for the first nine months of the fiscal year fell 30 percent because of languishing sales of its Wii U home consoles and game software. AP FILE PHOTO

TOKYO, Japan—Profit at Nintendo Company fell 30 percent in the first nine months of the fiscal year as sales of Wii U home consoles, 3DS devices and game software languished.

The Japanese maker of Super Mario and Pokemon video games reported Wednesday a 10.2 billion yen ($99 million) profit from April to December, down from 14.55 billion yen a year earlier. It did not break down quarterly numbers.

The popularity of smartphones, tablets and other gadgets has been drawing consumers away from consoles devoted to games. Nintendo has resisted changing its business to incorporate such devices.

“It would be a positive surprise if Nintendo comes out with an online game strategy for smartphones, although the market doesn’t expect that move,” said Tomoaki Kawasaki, senior analyst at IwaiCosmo Securities Company.

Consumers will still buy Nintendo games if they are wowed by them, but that hasn’t been happening, he said.

Nintendo slashed its annual forecast for Wii U sales from nine million units to just 2.8 million, fewer than a third of its earlier estimate.

“In the fourth quarter, we expect sales to decrease significantly due to seasonal factors as the year-end sales season concludes,” Nintendo said in a statement.

The company is expecting software sales to struggle as well.

Nintendo’s philosophy is to take the road less traveled and “they have been steadfast in sticking to that strategy,” said Eiji Maeda, senior analyst at SMBC Nikko Securities Inc.

Nintendo hits a home run once in a while, said Maeda, noting that the Wii and DS devices were hits.

The weak yen, which is generally a plus for exporters such as Nintendo, was not enough to offset the damage from sluggish sales. Nintendo racked up a foreign exchange gain of 48 billion yen ($465 million) during the first three quarters, more than double the same period the previous year.

Nintendo focuses on games at E3 with new ‘Mario’