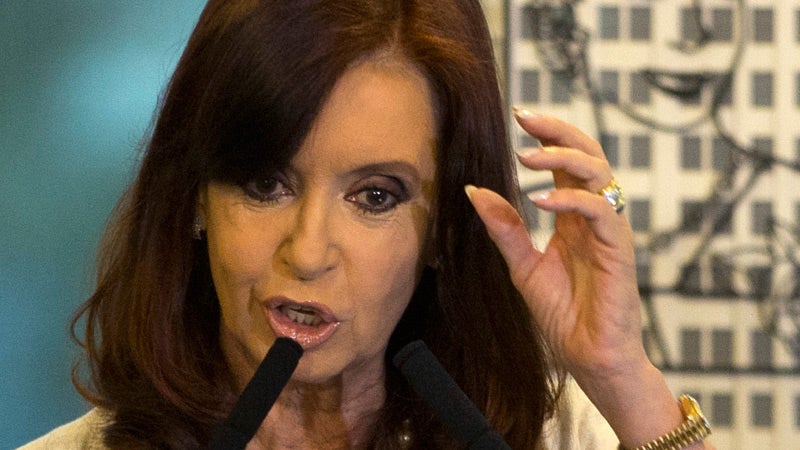 BUENOS AIRES, Argentina — A free smartphone application has encouraged more than 70,000 Argentines to become citizen-cops as they shop.

“We want you to protect what’s yours, because if not the others will win out every single day,” the president said in a national address this week.

Now a free app designed by two college students is helping consumers do just that by scanning bar codes to find evidence of overpricing. The “Precios OK” software appears to be an instant hit, with downloads in Argentina surpassing that of “Candy Crush” and “Instagram” in the Android store this week.

Independent economists say supermarkets are being scapegoated, and that government efforts to control the economy are making the crisis worse. A typical supermarket stocks 40,000 or more products, and price shocks are reverberating throughout the economy.

But consumers are gladly signing up to do their part as news of the app spreads on social media.

“You can go checking the prices,” marveled Analia Becherini, who learned of the app on Twitter. “You don’t even have to make any phone calls. If you want to file a complaint, you can do it online, in real time.”

The software was designed by a pair of computer engineering students at the University of Buenos Aires, Yamila Fraiman and Alejandro Torrado, who previously won an award for a different app that helps drivers find parking spaces in the Argentine capital.

“In Argentina it’s really useful with people wanting to watch their pockets right now,” said Fraiman, 24. “We are not really going through the best of times, and people really need to be attentive when they go shopping.”

President Fernandez praised the tool during a national address this week after her aides learned of it. She said it takes just five minutes to download and is easy to use. “It’s time for everyone to feel empowered when they shop in their neighborhood,” she said.

Many Argentines have lost confidence in their economy, which is closely tied to dollar prices. For nearly two years, the government has used its central bank reserves to pay off foreign debts and fund a vast expansion in government spending. But with foreign currency reserves dropping by half to $27.8 billion, it is running out of maneuvering room.

Public works are being suspended, the economy is in retreat and many businesses are struggling to figure out how to price their products without selling at a loss. Then the Central Bank stopped selling dollars last month, prompting a sudden 20 percent currency devaluation and accelerating the inflation that already topped 28 percent last year.

Economist Dante Sica of Abeceb.com said Thursday that the app is a great little tool, but it alone can’t end the turmoil, in part because the price controls cover only a tiny fraction of the economy, and because businesses quickly find ways to maintain profits by offering products in different sizes, flavors and packages.

The “protected prices” campaign “has already proven to be a failing strategy,” he said.