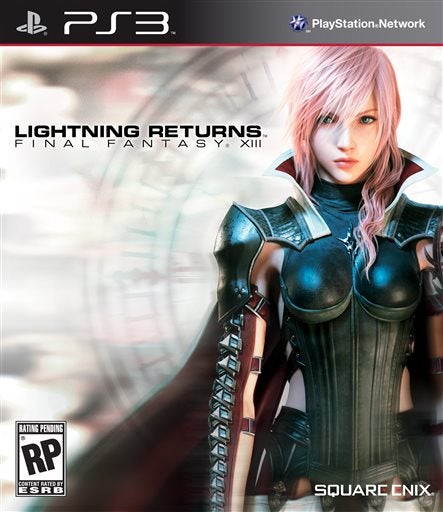 I love Peter Jackson’s “Lord of the Rings” films, but even the biggest Tolkien geek has to admit that “The Return of the King” drags at the end. It’s nice to say farewell to all the dwarves and elves and hobbits we’ve come to know and love, but — heck, just wake me when it’s over.

“Lightning Returns: Final Fantasy XIII” (Square Enix, for the Xbox 360, PlayStation 3, $59.99) is like the last 20 minutes of “The Return of the King” stretched over a 50-hour-plus video game. So you get tearful goodbyes from Snow, Fang, Vanille and the rest of the gang you met back at the beginning of this trilogy, 2009’s “Final Fantasy XIII” — even though you probably already forgot about them long ago.

You don’t need to have played the earlier “XIII” chapters to understand “Lightning Returns.” (Indeed, I defy anyone to make sense of the train wreck of time-travel paradoxes in 2012’s “Final Fantasy XIII-2.”) Here’s the essence: The heroine, a warrior named Lightning, has been reincarnated with godlike powers. The world is going to end in 13 days, and her task is to save as many souls as possible.

So, every morning Lightning departs the celestial plane and enters the more Earthly realm of Nova Chrysalis. Each neighborhood is packed with pilgrims preparing for the Rapture. Some may ask you to kill a few monsters; others may present more complicated tasks, like nursing a chocobo (the giant chicken who’s sort of the mascot of “Final Fantasy”) back to health.

The clock is always ticking, and you can’t solve everyone’s dilemmas, although which missions are more important becomes quickly apparent. I found the artificial time constraint frustrating; “Lightning Returns” feints toward the open-world adventure of, say, “Skyrim,” then punishes you if you spend too much time exploring.

Battles have evolved into more fast-paced affairs. You can dress Lightning in three outfits — say, one heavily armored, one built for physical attacks and one built for magic. During a fight you can switch outfits on the fly, and you’ll need to, because enemies constantly change their attacks. It’s essentially like switching among three different characters, and it’s a challenging and ultimately rewarding system that makes almost every battle feel fresh.

Like any “Final Fantasy” game, “Lightning Returns” kicks around some weighty ideas about fate, duty, redemption and salvation. And it offers a few nice, personal moments among Lightning and her former comrades. But as delivered over three games and 150-plus hours, the story told by the “Final Fantasy XIII” trilogy is bloated, incoherent and ultimately silly. It aims for “wow” and settles for “huh?” Two stars out of four.

“Bravely Default” (Nintendo, for the 3DS, $39.99) has “Final Fantasy” in its DNA — Square Enix published it in Japan — and fans of the older “FF” epics will adore it. You are a boy named Tiz, and your hometown has been destroyed by an earthquake. Of course, supernatural forces are at work, and you must join forces with three more plucky youngsters to save your world from oblivion.

Combat is what role-playing aficionados call “turn-based”: You select your four characters’ actions from a menu, tap “go” and watch them play out. The gimmick here is that any character can “default,” assuming a defensive stance and storing up energy. On the next turn, you can select “brave” to unleash that pent-up energy, making your attacks doubly effective.

The brave/default strategy becomes more important in end-of-dungeon boss battles, when one wrong choice can get your entire party killed. And be warned: At its initial setting, this is one tough game. Don’t feel guilty about fiddling with the menus and dialing down the difficulty.

The story drags at times and doesn’t hold many surprises, but “Bravely Default” does offer plenty of flexibility in building your characters as they rampage across the wilderness. It’s a beautifully executed homage to the Japanese RPGs many of us grew up on, and could even inspire younger gamers to hunt down some of those old-school gems. Three stars out of four.

From swim goggles to SLRs