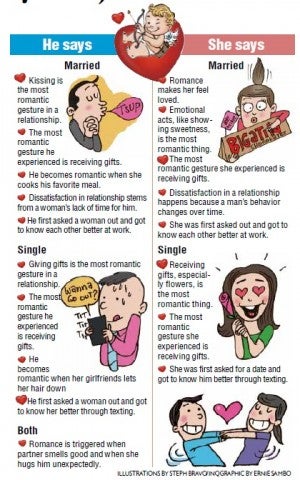 MANILA, Philippines—It all began when Rhafael Rodriguez went over his family’s store records to get Anne’s cell phone number.

“The relationship started when I copied her cell phone number from our store. Anne used to buy load in our store. Then I asked her out. I think it was fairly easy for me to do that, because we were childhood friends too,” Rhafael said.

On April 23, Rhafael and Anne will celebrate their 10 years of togetherness and their fourth wedding anniversary.

Like Rhafael and Anne, about half of younger Filipino couples in Metro Manila started their relationship through texting, a recent Nielsen survey found.

The survey also found that more than half of single women (55 percent) and single men (71 percent) said they got to know their partner through texting.

Computer-mediated communication (CMC) is becoming a common theme among relationships and there are pros and cons to this approach.

Rejection is easier to handle in CMC, according to Adrianne John Galang, a psychological scientist affiliated with De La Salle University and University of the Philippines Diliman.

“Self-presentation is easier [in CMC] but at the same time someone can research about you online and form impressions about you that you can’t control. [This] can make relationships more intrusive,” Galang added.

In the Aug. 23 to 30, 2013 survey, Nielsen used face-to-face interviews with 400 respondents in Metro Manila, broken down into four groups.

— 100 single men (aged 18-25, unmarried but in a heterosexual relationship for already six months at least).

— 100 single women (aged 18-25, unmarried but in a heterosexual relationship for already six months at least).

Apart from looking into trends in courtship, the survey, which used significant testing at the 95-percent confidence level, also asked the respondents various questions about romance.

The survey found that almost (38 to 49 percent) of the respondents “spontaneously” said that the most romantic gesture they had experienced was receiving gifts.

A week before Valentine’s Day, Anne had given Rhafael a gift. “I love giving gifts to Rap. I want to surprise him all the time,” she said.

Anne considers her husband the total opposite. She has accepted the fact that he is not someone who is fond of showing sweetness. But on Valentine’s Day last year, Rhafael surprised her with flowers when she got home from work.

As a police officer, night shifts are part of Rhafael’s work while Anne, a finance sector analyst, works during the day.

Given their conflicting schedules, Anne said her husband’s presence would be the most special gift on Valentine’s Day.

People become givers on the day of hearts. Even those not big on giving go out of their way to make their loved ones feel special.

Sales of flowers at the Dangwa flower market in Manila somehow supports this trend.

Spring Blue and Purple Flower Shop said that on Valentine’s Day, it could sell up to 500 more bouquets of roses or assorted flowers than on regular days.

When it comes to romantic acts, intangible gestures were deemed more romantic by most of the respondents but the most romantic gesture they had experienced was receiving gifts.

One in every five married men and one in four married women held that romance was best expressed through showing emotional acts like giving care and showing sweetness.

When given a list of choices, the majority across all groups chose a passionate kiss (61 to 76 percent) and holding a woman’s hand (67 to 74 percent) as the most romantic gesture.

The findings do not indicate that gifts are not important but they show what else people want aside from gifts, Galang said.

“There is evidence that experiences bring more satisfaction in the long term compared with receiving or buying objects, which might add to the yearning for more than material assurances of affection,” Galang said.

When not presented with options, respondents readily associated romance with physical touch, such as sex (30 to 33 percent) and kissing (8 to 14 percent) as well as emotion-related acts like showing love (16 to 23 percent), tenderness (7 to 11 percent) and sweetness (9 to 17 percent).

These romantic acts are often expressed by men during their partner’s birthday or when it is just the two of them.

For Camille Nones, 25, romance is the expression or act of showing each other your love, a sentiment shared by most Filipinos.

“I think that romance is something special, solemn and sacred that’s between you and your partner. It is very important because showing your love is equally as important as saying it,” said Nones.

Her boyfriend, Allaa Al-harthy, 28, described as romance the sweet things that partners did together or for each other.

He started learning how to cook a few years back so he could make Nones a dish every weekend.

According to the survey, both men and women see romance as validation of their love.

The percentages of those who said that the most important reason for romance in a relationship was “to make a woman feel loved” ranged from 32 percent to 38 percent.

On a scale of 1 to 10, with 10 being the most romantic, the respondents were asked to rate how romantic Filipino men are. The average rating across all groups ranged from 7.9 to 8.4.

The respondents also rated the level of satisfaction in terms of romance in their relationship from 1 to 10, with 10 being the highest. The average satisfaction level across all groups ranged from 8.2 to 8.7.

* Kissing is the most romantic gesture in a relationship.

* The most romantic gesture he experienced is receiving gifts.

* He becomes romantic when she cooks his favorite meal.

* Dissatisfaction in relationship stems from a woman’s lack of time for him.

* He first asked a woman out and got to know each other better at work.

* Giving gifts is the most romantic gesture in a relationship.

* The most romantic gesture he experienced is receiving gifts.

* He becomes romantic when her girlfriend lets her hair down

* He first asked a woman out and got to know her better through texting.

* Romance is triggered when partner smells good and when she hugs him unexpectedly.

* Emotional acts, like showing sweetness, is the most romantic thing.

* The most romantic gesture she experienced is receiving gifts.

* Dissatisfaction in a relationship happens because a man’s behavior changes over time.

* She was first asked out and got to know each other better at work.

* Receiving gifts, especially flowers, is the most romantic thing.

* The most romantic gesture she experienced is receiving gifts.

* She was first asked for a date and got to know him better through texting.