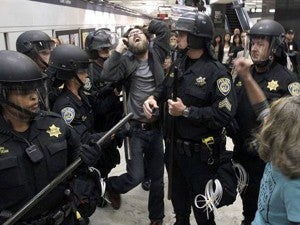 BART police officers push back a protester at the Civic Center station in San Francisco on Monday. Cellphone service was operating as protesters gathered at a San Francisco subway station during rush-hour several days after transit officials shut wireless service to head off another demonstration (AP Photo).

SAN FRANCISCO— Rush-hour protests prompted the closure of four San Francisco subway stations and sent hundreds of commuters into the sidewalks and streets during rush hour Monday, but there were no new wireless service shutdowns.

The Bay Area Rapid Transit agency is in the midst of a raging debate over how far authorities can go to disrupt protests organized on social networks after they jammed cellphone service Thursday to quell a brewing protest on one of its platforms over police brutality.

The shutdown of wireless towers in stations near the protest Thursday raised questions about the role that social networks play in helping people, from Egypt to London, organize online. In the U.S., with its history of free speech, critics are saying BART’s move was unconstitutional.

BART spokesman Linton Johnson declined to answer questions about why the agency decided to keep the wireless system operable Monday.

Cellphone service was operating Monday night as an estimated 50 protesters gathered on the Civic Center Station platform chanting “no justice, no peace” shortly after 5 p.m. Thirty minutes later, police in riot gear and wielding batons closed the station and cleared the platform after protesters briefly delayed an east-bound train from departing.

From Civic Center, the protesters were joined by more demonstrators and marched down San Francisco’s Market Street, and attempted to enter to more stations. Officials closed those stations as well.

Hundreds of people stood on the sidewalks and streets outside stations in the city’s Financial District on Monday evening. Many of the people appeared to be commuters.

Elijah Sparrow, a protester, called the demonstration “one of the defining battles of the 21st century over who is going to control communication.”

BART officials have said their primary concern was to ensure that passengers are safe.

“Finally, BART said enough,” said Bernick. “BART put its riders and commuters ahead of these protesters and the ACLU.”

BART cut power to its wireless nodes Thursday night after learning demonstrators planned to use social media and text messaging to protest police brutality. The tactic appeared to work because no protest occurred.

BART’s actions prompted a Federal Communications Commission investigation, and a hacking group organized an attack on one of the agency’s websites on Sunday and posted personal information of more than 2,000 passengers online. The group, named Anonymous, called for a disruption of BART’s evening commute Monday.

“We are Anonymous, we are your citizens, we are the people, we do not tolerate oppression from any government agency,” the hackers wrote on their own website. “BART has proved multiple times that they have no problem exploiting and abusing the people.”

BART spokesman Jim Allison said BART has notified the FBI, and that no bank account or credit card information was listed.

BART officials, meanwhile, defended the shutdown of the cell service as a legal approach to ensure commute safety.

A protest last month on a San Francisco platform calling for the dismissal of the transit officers responsible for the July 3 shooting death of a man wielding a knife prompted the closing of one station and caused system-wide delays during rush hour.

Allison said the wireless outage was only for platforms and trains running under the city, places where protests are banned.

By Monday, a growing number of free speech advocates were calling on BART to renounce the tactic, with many calling the action an unconstitutional attempt to stifle lawful protest. Even a BART board member criticized the action.

“We really don’t have the right to be this type of censor,” said Lynette Sweet, who serves on BART’s board of directors. “In my opinion, we’ve let the actions of a few people affect everybody. And that’s not fair.”

Risher, the ACLU attorney, met with BART’s police chief in Oakland during the protest in San Francisco.

He said he was disappointed that BART wasn’t prepared to commit to a firm policy against shutting wireless service except for in the most dire situations to ensure public safety, but said the ACLU had no plans to file a lawsuit.

Regardless of its strict legality, Tien said the tactic was unsavory and compared it to former Egyptian President Hosni Mubarak’s shutting down access to the Internet in a failed attempt to stop civil unrest.

Bernick, the former BART director, said Northern California governments such as BART have been struggling for years with how to handle vocal political demonstrations that often escalate to violence.

BART and Oakland, in particular, have experienced several large-scale protests that turned into riots after a white transit officer shot the unarmed black commuter Oscar Grant on New Year’s Day 2009.

BART officials said they are working on a plan to block any efforts by protesters to disrupt the service, which carries 190,000 passengers during the morning and evening commutes every day.

The BART computer problem was the latest hack the loosely organized group claimed credit for this year.

Last month, the FBI and British and Dutch officials made 21 arrests, many of them related to the group’s attacks on Internet payment provider PayPal Inc., which has been targeted over its refusal to process donations to WikiLeaks.