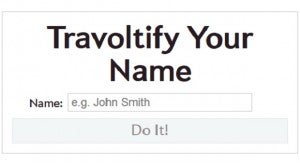 MANILA, Philippines – Filipino netizens seemed to be suffering from a “last song syndrome” (LSS) on Twitter, belting (or tweeting) out lyrics of the hit song “Let it go” from the Disney animated film “Frozen.”

The hashtag #LetItGo even trended on Twitter on Tuesday, a day after the song and the movie bagged the Oscars in the 2014 Academy Awards for its composers Robert Lopez and wife Kristen Anderson-Lopez.

Netizens seemed thrilled, too, that Robert Lopez was of Filipino descents and that he also got in the elite circle of “Egot” winners – or those who bagged an Emmy, Grammy, Oscar, and Tony Awards.

The hit song was performed in the movie by veteran Broadway performer Idina Menzel, known for playing Elphaba in “Wicked” and Maureen in “Rent.”

Viewers of the latest Oscar Awards were also quick to point out the way actor John Travolta introduced Menzel before she sang the song in the Academy Awards.

Travolta introduced the singer as “Adele Dazeem,” a far cry from the Broadway performer’s real name.

This sparked Oscar fan netizens to “Travoltify” their names to funny-sounding versions that they attribute to how Travolta could have mistaken their names.

The daily magazine website Slate.com even created its own “Adele Dazeem Name Generator” that would translate netizens’ names to, well, how Travolta would say it.

Some netizens belted out the lyrics of “Let it go” on Twitter.

Some netizens belted out the lyrics of “Let it go” on Twitter.