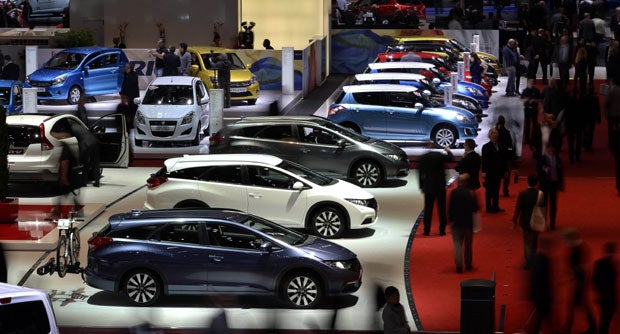 People attend the press day of the Geneva Motor Show in Geneva, on March 5, 2014. AFP

GENEVA – Brew an espresso, watch a movie on a large screen, surf the Internet or simply sit and chat with friends?

As automakers and technology firms steer towards a future of driverless cars, a Swiss think tank is at the Geneva Motor Show this week showing off its vision of what vehicles might look like on the inside when people no longer have to focus on the road.

“Once I can drive autonomously, would I want to watch while my steering wheel turns happily from left to right?” asked Rinspeed founder and chief executive Frank Rinderknecht.

“No. I would like to do anything else but drive and watch the traffic. Eat, sleep, work, whatever you can imagine,” he told Agence France-Presse at the show, which opens its doors to the public Thursday.

Google is famously working on fully autonomous cars, and traditional carmakers are rapidly developing a range of autonomous technologies as well.

With analysts expecting sales of self-driving, if not completely driverless, cars to begin taking off by the end of this decade, Rinderknecht insists it’s time to consider how the experience of riding in a car will could be radically redefined.

Patting his shiny Xchange concept car, Rinderknecht says he envisages a future where car passengers will want to do the same kinds of things we today do to kill time on trains an airplanes.

So Rinspeed has revamped the interior of Tesla’s Model S electric car to show carmakers how they might turn standard-sized vehicles into entertainment centres, offices and meeting spots wrapped into one.

The seats can slide, swivel, and tilt into more than 20 positions, allowing passengers to turn to face each other or a 32-inch screen in the back.

Up front too, an entertainment system lines the entire length of the dashboard, and the steering wheel can be shifted to allow passengers a better view of the screens.

And of course there is an espresso machine.

While brewing coffee, video conferencing and keeping an eye on your email at 120 kilometres an hour may sound like a fantasy today, Rinderknecht is convinced it could happen in the not too distanced future.

“We think this is what things could look like in a few years time,” he said.

Driving, he said, is on the cusp of being redefined, allowing people to take the wheel for pleasure, for instance while going over an Alpine pass, but handing over control of the car on tedious stretches.

“If I have to go three hours from Geneva to Zurich and it’s congested, I’m not doing anything… I want to be doing something else,” he said.

Carmakers at the Geneva Motor Show seemed to agree that vehicles that drive themselves, at least to a certain extent, are on the horizon.

He stressed though that “full automation” was not a priority.

Ford Europe chief Stephen Odelle also said the technology was speeding forward, but added that he believed “the technology will be ready before legislation and consumers are.”

“How comfortable will consumers be with fully automated cars?” he asked, adding that legislating for liability would be quite tricky with no driver behind the wheel.

Rinderknecht acknowledged there are obstacles, but insisted “they can be overcome.”

He pointed out that accident reduction is actually a major argument for automation, since once the technology is finalised the machines should be far more reliable than humans.

And while it will be an upward battle to redefine liability legislation, “I think it can be done, because laws must adapt to life, and life as we all know changes,” he said.