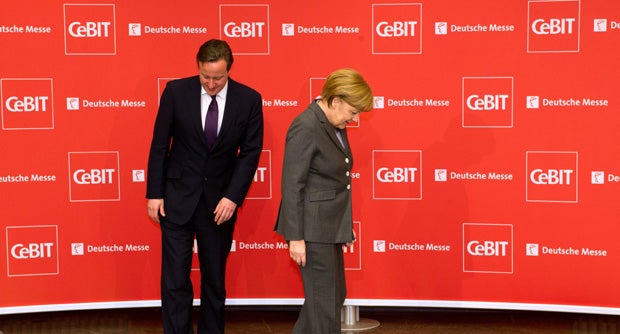 German Chancellor Angela Merkel , right, and British Prime Minister David Cameron , left, look for their marks during the official opening event for the computer fair CeBIT at the Congress Centrum in Hanover, Germany on Sunday, March 9, 2014. Britain and Germany will team up to work on developing the next super-fast mobile network, 5G, Cameron told the opening of the world’s biggest high-tech fair. AP

HANOVER, Germany—Britain and Germany will team up to work on developing the next super-fast mobile network, 5G, Prime Minister David Cameron told the opening of the world’s biggest high-tech fair Sunday.

Cameron said the initiative was one of three areas he wanted Britain and Germany to collaborate on to “pool ideas, share data, innovate and to lead on the next big ideas” in what he dubbed “a world on fast forward”.

The future fifth-generation, or 5G, network will enable a full-length film to be downloaded on the Internet in one second, Cameron said at the official CeBIT inauguration in the northern city of Hanover, attended also by Chancellor Angela Merkel.

“This is a prize that researchers all over the world are going for,” he said, unveiling the new collaboration between Germany’s Dresden University and Britain’s King’s College University in London and the University of Surrey.

Britain is the CeBIT’s partner country this year at the five-day event, focused on the theme of “datability”: the ability to use vast amounts of data quickly and responsibly.

Amid global debate about data security following revelations of mass US and British online snooping, a key CeBIT theme this year is how to keep data secure.

Berlin and London have both been caught up in the surveillance scandal revealed by rogue US intelligence analyst Edward Snowden.

Cameron made no mention of the data prying.

However, Merkel stressed the importance of making progress on Europe’s common rules for data protection, but said this must also be the subject of intensive talks with the United States.

Cameron said he was eying closer German-British collaboration on improving Europe’s telecommunications single market and the Internet of Things, or getting everyday objects to talk to each other over the Internet.

“This has enormous potential to change our lives,” he said, outlining examples such as health monitors that keep an eye on the heart rate or blood pressure.

“We are on the brink of a new industrial revolution and I want us, the UK and Germany, to lead it,” he said, announcing 73 million pounds (88 million euros, $122 million) in funding to boost research on the Internet of Things.

Merkel, who will again join Cameron Monday for a tour of the sprawling CeBIT halls, described it as a “miracle” that former foes Germany and Britain could today talk about closer collaboration on the basis of democracy and freedom.

This, she continued, was also true for how the two EU countries together “support those, I mention Ukraine as an example, who today must still fight for their freedom.”

Cameron and Merkel each talked to Russian President Vladimir Putin earlier Sunday about Ukraine and the crisis was expected to be one of the focal points of their talks at a dinner later.

Merkel told Putin that she considered the referendum being held in Crimea this month on joining Russia was “illegal.”—Kate Millar