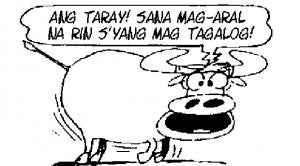 ROME—Pope Francis may have millions of followers on Twitter but he has a long way to go before he can catch up with US President Barack Obama.

But while the US president may have an edge in the number of Twitter followers, the Pope apparently has one advantage—he tweets in nine languages.

In the latest illustration of how important the microblogging site has become for the Church’s communication with the faithful and nonbelievers, the Pontiff on Thursday sent a tweet to 12 million followers, seeking their prayers.

With Francis absent from Rome on a spiritual retreat this week, no official events were organized to mark the first anniversary   of his election.

But the first Pontiff from Latin America did not remain absent from the Twittersphere, a domain in which he is now one of the biggest players on the planet.

“Please pray for me,” a message from his official @Pontifex account said in an echo of what Francis said in person a year ago in the more traditional papal setting of a postelection appearance on the balcony of St. Peter’s.

Or, “Orate pro me” as he put it on his feed in Latin, one of the languages in which he reaches out to followers across the globe.

The Latin account has been a surprise hit with 225,000 followers already, to the delight of the ancient language’s dwindling band of teachers across the world.

The historic lingua franca of the Church is never likely to catch up with Spanish, in which Francis has recently broken through the 5-million barrier.

English is the second most successful of the papal Twitter languages with 3.8 million people receiving messages as of Thursday afternoon.

Francis is not the first Pope to tweet. His predecessor,

Benedict XVI, started shortly before announcing his decision to retire because of failing health.

The new Pope from Argentina quickly demonstrated that the 140-character limit was perfect for the punchy delivery of the key messages he wants to transmit to his flock.

His entry to the Twittersphere came four days after his election. “Dear friends, I thank you from my heart and I ask you to continue to pray for me,” he said.

The central importance of prayer has been a recurring theme of the tweets that have followed, at an average of just under one a day.

Some are barely comprehensible to non-Catholics, for example Feb. 8’s: “The Sacraments, especially Confession and the Eucharist, are privileged places of encountering Christ.”

But it is not all theology.

The immediacy of the social medium also offers the leader of the world’s 1.2 billion Roman Catholics to react quickly to global events, or voice his views on the social issues of the day.

Messages that have made particular waves included one, in October, that reinforced Francis’ anticapitalist credentials.

“If money and material things become the center of our lives, they seize us and make us slaves,” he tweeted.

On Nov. 9, he wrote: “I ask all of you to join me in prayer for the victims of Typhoon Haiyan/Yolanda especially those in the beloved islands of the Philippines.”

Francis also has a good line in homespun practical tips for living a more satisfied life, for example: “I cannot imagine a Christian who does not know how to smile.”

The image of a Pope who is never without his smartphone is an appealing one for many, but in reality there is a large team behind the Vatican tweeting operation.

The process is not without certain risks given the largely unregulated nature of Twitter.

One year of Pope Francis: 10 highlights