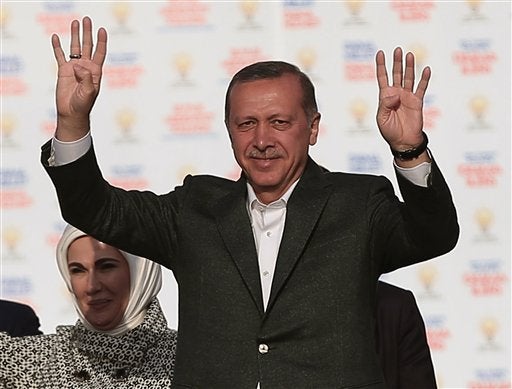 In this March 23, 2014, file photo, Turkish Prime Minister Recep Tayyip Erdogan addresses supporters of his Justice and Development Party during a rally in Istanbul, Turkey. His wife, Emine, is at the left. Erdogan banned YouTube on Thursday after the video-sharing website was used to spread damaging leaked audio files from a state security meeting debating possible military action in Syria. AP PHOTO/EMRAH GUREL

The recording purports to be of senior Turkish government, military and spy officials discussing plans to stage an armed clash in Syria or a missile attack that would serve as a pretext for a military response.

Prime Minister Recep Tayyip Erdogan—already ensnared in a corruption scandal and hit by recent mass protests ahead of crucial local elections on Sunday—angrily lashed out at his political opponents for leaking the recording.

“They have leaked something on YouTube today,” he told a campaign rally in the southeastern province of Diyarbakir. “It was a meeting on our national security. It is a vile, cowardly, immoral act. We will go into their caves. Who are you serving by eavesdropping?”

Erdogan did not mention his foe by name, but he has in the past used the “cave” reference for his former ally-turned-nemesis, US-based cleric Fethullah Gulen, whose movement has many followers in the Turkish police and judiciary.

The premier last week banned Twitter, sparking international condemnation, after the micro-blogging service was used to spread a spate of other audio files implicating Erdogan and his inner circle in corruption.

An Ankara court Wednesday overturned that ruling as a limit on free speech. Turkey’s telecommunications regulator TIB has 30 days to appeal the decision, and Twitter has yet to be restored, although the ban has been widely circumvented.

“This is another desperate and depressing move in Turkey,’ tweeted European Commission Vice President Neelie Kroes about the YouTube ban.

“I express my support for all those supporters of real freedom and democracy. We in Europe stand for an open Internet and free expression on it.”

Thursday’s YouTube leak is the first to focus on national security. Foreign Minister Ahmet Davutoglu labeled it “a declaration of war against the Turkish state and nation,” while his ministry said some sections had been distorted.

TIB said it was blocking YouTube on the grounds of a “primary threat against national security,” private NTV television reported.

The audio recording, which could not be independently verified, features a voice that sounds like that of Turkey’s spy chief Hakan Fidan saying: “If needed, we will launch an attack there.”

The voice also talks about dispatching “four men” and launching missiles, adding: “It is not a problem. A justification can be fabricated.”

The discussion also focuses on a historic site inside war-torn Syria that is technically part of Turkish national territory under an historic treaty.

The Islamic State of Iraq and the Levant (ISIL) militant group has threatened to attack the site—a tomb of Suleyman Shah, grandfather of Ottoman Empire founder Osman—which is located in Aleppo province.

Another voice, purportedly of Foreign Ministry Undersecretary Feridun Sinirlioglu, is heard saying that “from the point of legitimacy, the whole world would stand by us in case of an operation against ISIL.”

Erdogan’s parliamentary opponents have in the past accused him of planning military action in Syria to distract voters from his domestic troubles.

Main opposition leader Kemal Kilicdaroglu this month warned that Erdogan “could decide to move the army into Syria before the elections” and cautioned the military against it, saying: “Don’t send Turkey on an adventure.”

Davutoglu told AFP on Wednesday that “Turkey is ready to take any legitimate step under international law if its national security, including the area where the tomb of Suleyman Shah is situated, is threatened.”

In the recording, a voice allegedly belonging to Davutoglu is heard saying: “Between you and me, the prime minister said over the telephone that this (attack) should be used as an opportunity when needed.”—Fulya Ozerkan