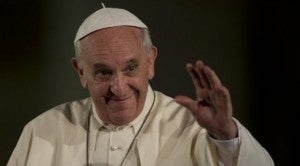 The video, recorded on an iPhone, lasts less than eight minutes. The message is simple: We’re brothers despite our differences.

Yet, religious leaders say this informal greeting from Pope Francis has reset relations between the Roman Catholic Church and one of its fiercest competitors around the world, Pentecostals.

Recorded by a clergy friend Francis had invited to Rome, the message was directed to the spirit-filled Christians whose popular movements have for decades been draining parishioners from the Catholic Church, especially in Latin America.

Catholics often compared Pentecostal groups to cults and accused them of overly aggressive, unethical proselytizing. But Francis, saying he was speaking from the heart, said in the video made in January he yearned for an end to their separation and invited them to pray with him for unity.

“Come on, we are brothers. Let’s give each other a spiritual hug and let God complete the work that he has begun,” the pope said.

The video has gone viral over the last month among Pentecostals and the Catholic leaders who work with them. While other popes have sought to build ties with Pentecostals, none before Francis had so broadly or directly reached out in friendship.

Norberto Saracco, a Pentecostal leader and seminary rector from Buenos Aires who worked with Francis before he became pope, said in an email that the video had “advanced relations with Pentecostals more than 42 years of Catholic-Pentecostal dialogue.” Cecil M. Robeck, who represents Pentecostals in high-level discussions with other churches, including Catholics and Anglicans, said the response from his friends and colleagues “has been remarkable.”

“It’s going everywhere. I’ve probably sent it out to 50 people or more,” said Robeck, a professor at Fuller Theological Seminary in Pasadena, California. “They keep writing back and saying, ‘we have to spread this.'”

Pentecostalism, which includes established denominations as well as independent churches, is considered the world’s fastest-growing faith tradition. Among the movement’s ranks are charismatics — members of mainstream Christian churches deeply influenced by Pentecostal spirituality, including charismatic Catholics, who have had their own struggle for recognition by local bishops and the Vatican. (Francis has said that in the 1970s and ’80s, before he grew to understand and value charismatic Catholics, he told them they “confuse a liturgical celebration with a samba school.”)

Together, Pentecostals and charismatics comprise about one-quarter of the world’s 2 billion Christians.

The former Cardinal Jorge Bergoglio was known to have built close relationships with Pentecostals when he was archbishop of Buenos Aires, angering traditionalist Catholics who said he went too far. A photo widely circulated after last year’s papal election shows Bergoglio kneeling onstage at a Catholic-evangelical gathering, his head bowed, his hand placed over his heart, to receive a blessing from Pentecostal leaders. Still, until the video greeting this year, it was unclear whether he would stay as close to the movement as pope.

In the recording, Francis is sitting in a chair, leaning toward the camera and speaking without notes, as if in casual conversation with a friend. By turns smiling and furrowing his brow, he compares the divisions between Catholics and Pentecostals to those of families who live in the same neighborhood who sometimes don’t get along. He blames sin and “misunderstandings throughout history” on both sides for their rift, and says they should move forward together from now on.

“I am speaking to you as a brother. I speak to you in a simple way, with joy and yearning,” Francis said. “Let us allow our yearning to grow, because this will propel us to find each other, to embrace one another and together to worship Jesus Christ as the only Lord of history.”

The men who ended up carrying this papal greeting to the Pentecostal world have drawn as much attention as the message itself, in what has become the latest instance of the pope going well outside traditional channels to make a point.

The recording was made by a clergyman from an obscure movement, and broadcast at a meeting led by a Texas-based Pentecostal televangelist who many Christians consider far from the mainstream. (The combination was so startling that religion commentator Rod Dreher, introducing the video on theamericanconservative.com, began his post, “Are you sitting down for this?”)

The visiting friend was Bishop Tony Palmer, an ecumenical officer for the Communion of Evangelical Episcopal Churches who had met Bergoglio years ago on a mission to Buenos Aires. Palmer’s communion has roots in a movement that aims to unite streams of Christianity, including Anglicans, evangelicals and Pentecostals, and counts among its intellectual forebears U.S. theologian Robert Webber, author of “Evangelicals on the Canterbury Trail: Why Evangelicals Are Attracted to the Liturgical Church.”

Palmer said in a phone interview that the pope called him in January and invited him to Rome. In the video, Francis, calls him “my bishop brother Tony Palmer” and says, “we’ve been friends for years.” The Vatican spokesman, the Rev. Federico Lombardi, confirmed Palmer’s visit and the video’s authenticity.

His meeting with the pope came just before Palmer was scheduled to attend an international pastors’ meeting organized by Kenneth Copeland Ministries, which has a global reach. Copeland preaches the prosperity gospel, teaching that God will reward the faithful with health and wealth in this lifetime. Palmer, who formerly worked for Copeland’s ministry in South Africa, said he asked Francis for “a word for Kenneth and the leaders” at the gathering. The pope said yes, and the message was played at the event.

Many Christians in online forums have been distressed to see a pope who so closely identifies with the poor greeting a prosperity preacher. But Philip Jenkins, a Baylor University religion scholar and author of “The Next Christendom: The Rise of Global Christianity,” said it would be wrong to interpret the greeting as a doctrinal endorsement. Jenkins said the pope appears to be attempting something much simpler: acknowledging Pentecostals as fellow Christians.

“I think Francis is saying, ‘We’re all on the same team here. More unites us than divides us,'” Jenkins said.

Saracco said that in the video, Francis is acting as a pastor first, not a theologian, and is seeking to build connections with other people.

“This does not mean he ignores the theological or historical implications, but he put first the human being,” Saracco said. “When he speaks of the unity of the church, Francisco does not ignore what has occurred in centuries of division. But he decided, as he says in the interview, (to) speak the language of the heart. This language says: If you believe in Jesus you are my brother and we will walk together. It is a new paradigm in relations with the churches.”

Pentecostals would have to overcome their own historic distrust of the Catholic Church and its teachings if they want stronger ties with Rome. On Copeland’s Facebook page and other sites with links to the pope’s message, comments have been a mix of celebrating the papal gesture, and calling the pope a false prophet leading a false church. Copeland’s ministry declined to comment to The Associated Press.

But after the pope’s video was shown, an ecstatic Copeland led the pastors in an emotional prayer of thanks to the pope, including praying in tongues, and recorded his own iPhone greeting for Palmer to send back to Francis.

“I think what he was saying,” Robeck said of Copeland, “is that things are changing in Rome and we have to watch.”