‘Viber Out’ comes to Windows Phone 8 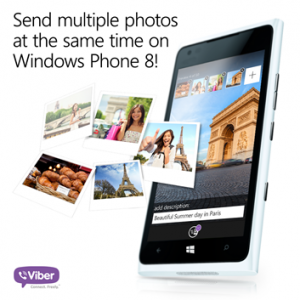 LONDON – Viber, the leading mobile communications platform offering free messaging and HD-quality phone calls, announced Monday the release of Viber 4.1 for Windows Phone 8 bringing “Viber Out” calls to the platform for the first time. Now Viber users on Windows Phone 8 can make affordable calls to their friends and contacts who have landlines or phones that don’t have Viber. Additionally, the update brings several key Viber features to the mobile Microsoft platform.

Viber has pursued a consistent strategy of supporting as many platforms as possible in order to expand the potential user base its users can contact, strengthening the capability of the platform. Viber allows users to communicate with almost any of their friends or contacts regardless of which platform they use. Now, with the addition of “Viber Out,” Windows Phone 8 users will be able to call any phone number with Viber.

“Viber Out has been a game changer for our users and allows them to rely on Viber for all their communication needs. With the addition of this critical feature to our Windows Phone 8 version, we are ensuring that the complete Viber experience is available on as many platforms as possible. This focus on cross-platform support is one of our most important commitments to our users,” said Talmon Marco, CEO of Viber.

The release also includes multiple feature updates that expand the functionality of the app, including: