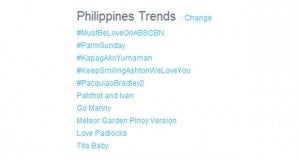 MANILA, Philippines – It’s that time of the year again. When boxing icon Manny Pacquiao enters the ring to face Timothy Bradley today (Sunday in Manila), expect roads to be cleared and crime rates to plummet.

But the Pacquiao craze was not enough to stifle hordes of “KathNiel” fans who tuned in to watch the free television premiere of “Must Be…Love,” a romantic comedy film starring Kathryn Bernardo and Daniel Padilla.

For a couple of hours on Sunday morning, the hashtag #MustBeLoveonABSCBN beat keywords pertaining to Pacquiao’s fight and Palm Sunday. The two actors’ names in the film – “Patchot and Ivan” – also briefly trended worldwide.

ABS-CBN aired some of the network’s most popular films released in 2013 to match its rival GMA Network’s screening of the Pacquiao-Bradley fight.

What was expected to be a Pacquiao-centric day on social media turned into a flood of comments about Palm Sunday, quotable quotes  from “Must Be…Love” and news about Pacquiao and Bradley.

As of 11:30 am, the hashtag #PacquiaoBradley2 ranked only 5th among the trending topics in the Philippines. However, it is expected to further rise once the fight starts.