MANILA, Philippines— Fans online were thrilled with Manny Pacquiao’s revenge victory over Timothy Bradley, praising him for a convincing performance on Sunday (Manila time) for the WBO welterweight champion.

Though he failed to score another knockout, Pacquiao was nonetheless relentless in engaging Bradley, pinning him on the ropes several times then unloading a trademark flurry of punches.

“It’s not all about KO. It is more on the strategy, finesse and the delivery…KO will just come. Manny did a good job inside the ring,” said Georj Bon Reimal in a comment on Facebook.

“The killer instinct is back in Manny. He tried to finish Tim by KO but Bradley seem so hard to hit. Tim fought not to win but to survive the bout. It’s a convincing win for Pacman,” Facebook user Sonny Matuan said.

“Speed, stamina, lateral movements, footwork and mental attitude, all of these attributes made Manny the winner. Big but humble and compassionate heart led him to victory,”  Hermy Quiniano said.

“Pacquiao did very well given the fact that Bradley did not really want to engage toe-to-toe and when he did, he clinched when hit,” Rod Beltran offered.

For another Facebook user Chet Ocram, the performance was enough to convince him that “Manny [Pacquiao] still in his prime.” 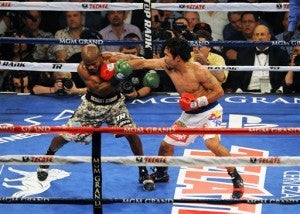 (The truth is, out of all the boxers Pacquiao’s the only one who always smiles and stays positive win or less. He’s a true humble sport towards his opponents. He was embraced by the world not just because of his talent, he was loved because of his simplicity amid all the honors he’s achieved.)

But there were others who were not swayed by the Filipino boxing champion’s performance, convinced that he truly has lost his power. Pacquiao’s last KO was against Miguel Cotto way back in 2009.

“I didn’t like the fight because Pacquiao didn’t show more aggressiveness but I’m glad he is still the winner,” said Cynthia Demarco.

“Hindi na sya ganon ka-galing kaya di na na-knockout (he’s not that good anymore that why he can’t pull off a knockout),” Harry Yo Cisneros said.

“Manny really moves differently now. He’s not the same as before. He is getting slower, older.

He doesn’t have his knocking out power. I don’t know if we can still see another one of his famous KOs. I really think he should retire,” Jimmy Abellanosa Badilla offered in Filipino.