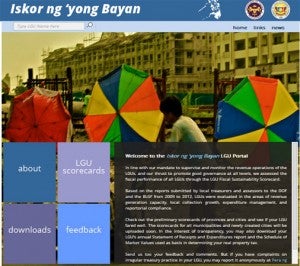 MANILA, Philippines—How well are the mayors managing the funds of their cities and municipalities?

Thanks to a new project of the Department of Finance (DOF), ordinary citizens may now find out how good their local governments are at handling taxpayer money.

Scorecards for all cities and municipalities in the country are available online via the Iskor ng ’yong Bayan website http://iskor.blgf.gov.ph.

Cities and towns are given scores based on several criteria that are divided into three major areas, namely, their revenue generating capacity, expenditure management, and qualitative indicators such as the timely submission of quarterly and annual reports.

Tagaytay City was the best performing LGU in 2012 with a score of 86.5 points. “Almost all of the city’s tax and nontax revenue sources posted sizeable increases in collection,” the Iskor website said.

“In determining compliance with statutory limitations on expenditures and budget management, we noted from the reports in 2012 that the city utilized less than 20 percent of the internal revenue allotment for local development projects,” it said.

Tagaytay City’s performance was described as “excellent” in all three years covered by the reports.

Quezon City, with a score of 86.3, was the second-best performing LGU in the country. It was also the only city in Metro Manila to receive an “excellent” grade for the year 2012. The city showed consistent improvement in the three years covered. In 2010, its score was considered “good” before improving to “very good” in 2011.

“We noted significant improvements in local revenue collections of the city, with total local revenues posting double-digit year-on-year growths from 2011 to 2012,” the DOF said.

Delinquent cities and towns that did not have reports, and the names of their respective city treasurers, were also published. For instance, Taguig City, where one of the country’s central business districts is located, failed to submit reports for all of the three years.

It was the only city in the country that did not have a report for all three years.